Mount your broomstick and get ready to fly high with the witches Winni, Wanda, and their new sister, Willow in the spooktacular new release from Realtime Gaming, Bubble Bubble 3. If you are a fan of the original Bubble Bubble as well as the sequel, you’ll definitely want to know what the girls have in store for you this time around.

The sexy trio have been working their magic to bring even more treats, tricks, and excitement this Halloween, complete with three times as many Jackpots and prize-winning opportunities. The powerful Crystal Ball acts as the Scatter in this game and when 3 or more appear left to right, all prizes are multiplied and 1 of 3 bonus rounds is activated. Unlock one of the Mega Magic bonus features to watch your bankroll fill up with Free Games, Re-Spins, and other spell-binding rewards that will have you turning sideways in your grave!

This brand-new episode of heart-racing fun features 5 reels and 50 fixed paylines complete with stacks of prizes and goodies that lurk between every reel. Witness the ladies use their dark powers to turn letters, numbers, amulets, hats, pumpkins, and other low-paying symbols into magical combinations that trigger a huge bag of prizes! When the Crystal Ball Re-Spins feature is triggered, you’ll win a Grand Jackpot when 15 Crystal Balls fill all 15 positions. During the Wilder Witches Feature, players may trigger the Win-Win feature which also features a Jackpot of a whopping X1000 times the bet!

The top reward in this spooky new slot is 4,000 times the bet per line. Trigger the reels and watch the witches work their powers to bring you riches! Play the new Bubble Bubble 3 at Slots of Vegas and get ready to fill your cauldron with a mountain of cash and treats this Halloween!

This Halloween-inspired slot game begins with 5 reels and 50 fixed paylines. Play online today for free or for real money! Sign up with a $30 deposit for a 300% No Max Cashout + 30 Free Spins on Bubble Bubble 3 plus x3 redemptions Simply use the code BUBBLE300.

Wild/Substitute Symbol: Winni the Witch and Wanda the Witch

300% NO MAX CASHOUT + 30 FREE SPINS Make your deposit and claim your bonus with the Coupon Code: BUBBLE300 Play now 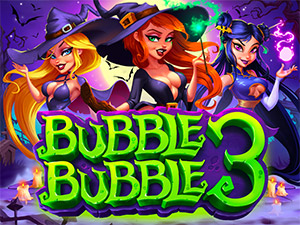 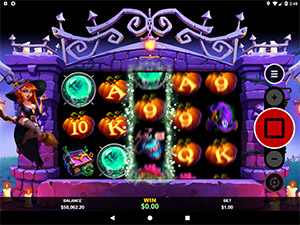 Once you’ve loaded the game, select your bet amount by selecting the + and - symbols at the bottom of the game screen. Once you’ve set your wager amount, click Spin. With a slot like Bubble Bubble 3, your best bet is to wager maximum coins. This sets you up for winning and being able to claim the game’s top reward.

Bubble Bubble 3 is a 5-reel slot game with pristine, high-definition graphics, spooky sound effects, plus bonus features with Free Games and excellent rewards. The top prize is 4,000 times the bet and the game includes 3 different Mega Magic bonus rounds where players have the chance to pick up prizes like Free Games, Re-Spins, and other brilliant rewards. Keep an eye out for Winni’s Magic Scatters and Hextastic symbols to help you strike up winning combinations on the way! Play Bubble Bubble 3 now at Slots of Vegas! Available for download on your PC, Mac, or mobile device.