Step up and claim the wealth of Rome! Thousands of years ago the Roman Empire ruled over the entire world and was headed by Caesar - Enjoy unimaginable wealth and luxury belonging to the richest man in the Roman Empire by playing this slot game now! Caesar's Empire is a popular 5 reel game and features 20 lines. The game allows players to bet anything from one cent to as much as one hundred dollars a spin. The scatter symbol used in the game is the Coliseum and the wild card is Caesar himself. Want the Chance to Win a Royal Fortune? Play Caesar's Empire Now.

The Roman Empire was one of the most opulent and prosperous civilizations of all time. You can now enter this great vast kingdom and take some of their riches back home and enter the Caesar's Empire. Caesar's Empire is a five reel slot machine offering some serious payouts, free games and a huge Progressive Jackpot. If you want to play free slots for free, make sure to visit our free play section, where you can enjoy this and many other games.
250% no max bonus+30 free spins Make your deposit and claim your bonus with the Coupon Code: CAESARS250 Play now 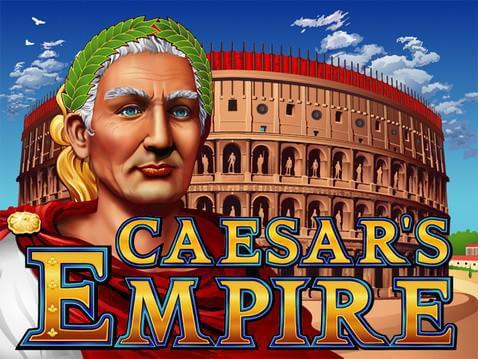 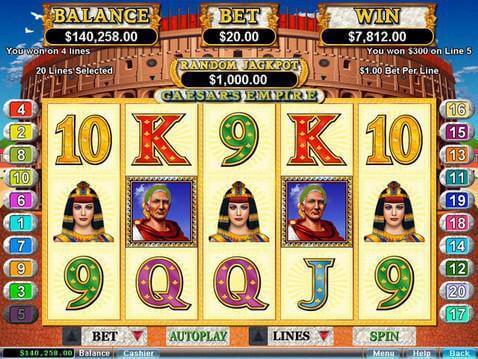 Caesar's Empire slot machine is played at a maximum 20 lines and a max bet per line of $5. You may spin the reels by simply pressing the Spin button or you can have the game spin the reels for you by using the Autoplay feature. Caesar serves as a wild icon, substituting for any other symbol in a winning combination except scattered "Coliseum". Every time the Cleopatra occurs in a winning combination prizes are tripled. A Free Game Feature is triggered by getting one or more Caesar's to appear anywhere and the scattered Coliseum to appear on reel 5. The Free Game Feature will award 10 free games during which prizes are doubled. Caesar's Empire Progressive Jackpot is triggered totally at random, regardless of the amount wagered.

Substitute: the substitute icon serves as a wild symbol substituting for any other symbol in a winning combination. Scatter: three or more scattered symbols appearing anywhere will trigger the Bonus Feature. Progressive Jackpot: the Progressive Jackpot accumulating 50 or more medals during free games. Enjoy this 20-line video slots game for free, instantly! Slots of vegas offer the chance to play free Caesar's Empire slot machine game for you to play instantly, for free – no download necessary. Great for games on-the-go! Fortune and Riches await you instantly at Slots of vegas.
EXCLUSIVE 250% BONUS + 50 FREE SPINS
CODE: WILD250