Head to the haunted house where the blood-thirsty Count awaits to shower players in cash and prizes in Realtime Gaming’s new 25-payline horror slot game, Count Cashtacular. As you venture further into the vampire’s crypt, you’ll encounter gruesome symbols like teeth, spiders, tombstones, blood-filled goblets, sexy she vamps, and a monster butler that pay out some handsome wins when 3 or more appear anywhere on the game’s 5 reels.

As for the bonus symbols, the Coat of Arms is the Scatter and the great Count himself acts as the Wild. Not only does he replace all symbols in the game as well as the Scatter, but when he appears on reels 1 and 5, a special Pick Bonus Feature is triggered. Here, players are given the choice between one of two prizes: 5 Re-Spins or 12 Free Games with Triple Prizes. While you cannot retrigger the Re-Spins feature, if Count Cashtacular shows himself again on reels 1 and 5 during Free Games, you’ll receive an additional 12 Free Games to ramp up your chances of hitting the jackpot!

Speaking of jackpots, the top award up for grabs in Count Cashtacular is a whopping 50,000 times the bet per line. If you want to maximize your winning potential, we recommend betting the maximum number of coins the game allows to give yourself the best fighting chance at scoring this prize and escaping the Count’s lair unscathed!

Step into the Count’s spooky abode and get ready to bleed the reels dry of Free Games, Re-Spins and cash in the new Count Cashtacular slot game, now available to play at Slots of Vegas casino!

This monster of a slot game begins with 5 reels and 25 fixed paylines. Play online today for free or for real money! Sign up with a $50 deposit for a 200% No Max Cashout + 50 Free Spins on Count Cashtacular with no redemption limit! Subject to x10 playthrough. Simply use the code CASHTACULAR.

Substitute Rules: The Count Cashtacular Symbol substitutes for all other symbols, including Scatters.

Pick Bonus Feature Rules: When Count Cashtacular symbols appear on reels 1 and 5 the player can then choose 12 Free Games with Triple Prizes, or 5 Re-Spins.

200% NO MAX CASHOUT + 50 FREE SPINS Make your deposit and claim your bonus with the Coupon Code: CASHTACULAR Play now 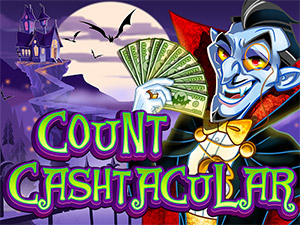 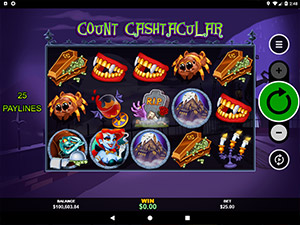 Once you’ve loaded the game, select your bet amount by selecting the + and - symbols at the bottom of the game screen. Once you’ve set your wager amount, click Spin. With a slot like Count Cashtacular, your best bet is to wager maximum coins. This sets you up for winning and being able to claim the game’s top reward.

Count Cashtacular is a 5-reel slot game with pristine, high-definition graphics, spine-chilling effects, plus bonus features with Free Games and excellent rewards. The top prize is 50,000 times the bet per line, and the game includes a Pick Bonus Feature where players can choose from one of two bonus prizes: 5 Re-Spins or 12 Free Games with Triple Prizes. The Scatter is the Coat of Arms and the Wild is Count Cashtacular, which replaces all symbols in the game including the Scatter. The only way to activate the Pick Bonus Feature is by landing a Wild on reels 1 and 5 at the same time during the base game. The top award is 50,000 times the bet per line. Play Count Cashtacular now at Slots of Vegas! Available for download on your PC, Mac, or mobile device.