Count Spectacular is quite the undead gambler. He's willing to bet against any human, and that's why he started his own slots game, named, of course, after himself. Besides having a great theme, Count Spectacular offers players huge bonus round opportunities. There is a load of fun and excitement to be had with Count Spectacular, and hoards of his fortune await anyone willing to venture into the crypt of this thirsty vampire. The bonus features in Count Spectacular guarantee a playthrough, but with lots of lines to bet on, and even more winning combinations to make money with, it's hard not to try out Count Spectacular. Play Count Spectacular today, but only if you're ready to win!
250% no max bonus+30 free spins Make your deposit and claim your bonus with the Coupon Code: COUNTSPEC250 Play now 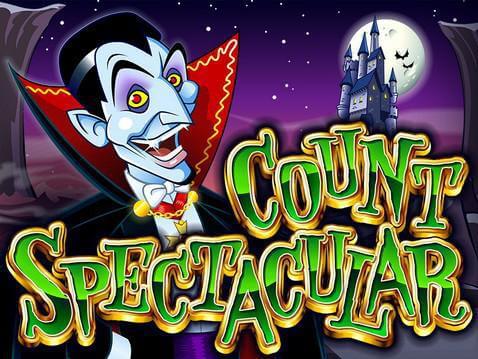 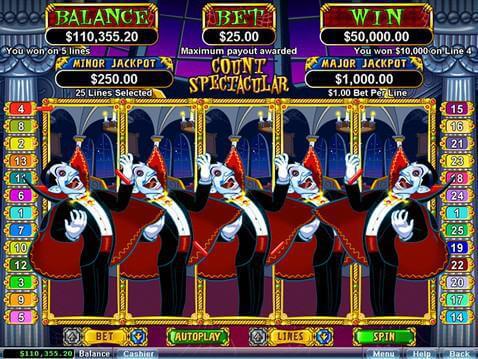 How to play Count Spectacular:

Count Spectacular has 25 paylines to bet on, the maximum going up to $25. How much you want to bet is entirely up to you though; you can bet as little as a penny per each payline. The maximum jackpot in Count Spectacular is 50,000 times your bet per line. Practice makes perfect, so make sure to practice our slot games on our Instant Play section, where you can test our free slot games without downloading anything. With a bonus game, an autoplay feature, and lots of different symbols to spin, Count Spectacular is a slots game worth playing. The bonus round is actually comprised of two separate bonuses: in one, you opt to receive 4 re-spins, and in the other, you can receive 12 free spins. Although the 12 free spins will feature a 3x multiplier on anything you win, the 4 re-spins are just as enticing. When selected, the first and fifth reels containing Count Spectacular symbols (which activate the bonus round in the first place) will hold, making it much easier to hit a jackpot.

Count Spectacular is a spooky-themed slot game that's a lot of fun to play, but it's profitable as well. Here are a few tips to help you win: