Realtime Gaming is calling all players to visit a mad laboratory where anything can happen – including massive wins. Dr. Winmore is the mysterious new slot game from Slots of Vegas, featuring 5 reels where wins occur when 4 or more symbols appear horizontally or vertically adjacent (not diagonally). In this fun and spooky game, you’ll encounter strange potions, mad creatures, and dangerous explosions against a pile of huge prizes to play for. Conjure up the right chemistry mix and you could win up to 300 times the total bet! The wild substitutes for all symbols in this game except Robots. Dr. Winmore is a super fun slot adventure with mysteries in every corner!

In this unique game, Dr. Winmore is a wild and counts for all symbols except Robots. Robots are the special symbols which appear randomly and remain on the reels until all other wins complete (may drop down), and will clear in specific patterns once there are no other winnings.

Dr. Winmore is a spellbinding slot game exploding with rewards and prizes on every spin! Players will uncover the secrets of this underground lab before reaching the top reward of 300 times the total bet! Dr. Winmore is the marvelous new slot game powered by the mad minds at Realtime Gaming. Play Dr. Winmore now at Slots of Vegas!

This mysterious slot game adventure starts with 5 reels. Play online today for free, as well as for real money! Sign up with a $30 deposit for a 300% No Max Cashout plus 30 spins on Dr. Winmore. 3x redemptions. Simply use the code WINMORE300. 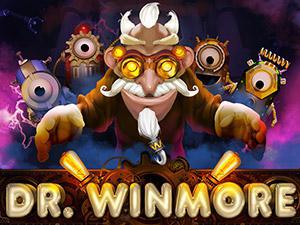 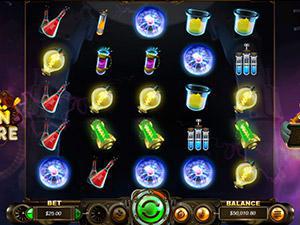 Once you’ve loaded the game, simply pick your bet amount by selecting the + and - symbols at the bottom of the game screen. Once you’ve set your wager amount, click Spin. We advise betting maximum coins to reach the highest potential payout. It won’t be long before you line up the explosive combinations to unleash the cascading wins! If you find yourself getting exhausted from spinning the reels manually, just click the Autoplay feature to get the reels spinning for you! Kick back, relax and watch those mighty wins roll on in by themselves!

Dr. Winmore is a 5-reel slot game with cascading wins and huge multipliers! There are exciting prizes to be won throughout, including a top reward of 300x the total bet!