Make a wish because the fairies are out in full force and they’re ready to grant your wishes for big wins. Welcome to the world of Enchanted Garden II, a 25-payline slots game at Slots of Vegas that’ll have you jumping up and down every time those pixies shower you with payout dust. If the game sounds familiar, it’s because it’s the sequel to the Slots of Vegas classic Enchanted Garden. In this updated version, you’ll find yourself playing in two different feature games where up to 10 free games with big prize multipliers are waiting to be won. Plus, there are tons of other surprises waiting for you around every bend. Play now and take a stroll through the most enchanted garden you’ve ever seen.
250% no max bonus+30 free spins Make your deposit and claim your bonus with the Coupon Code: EGII350 Play now 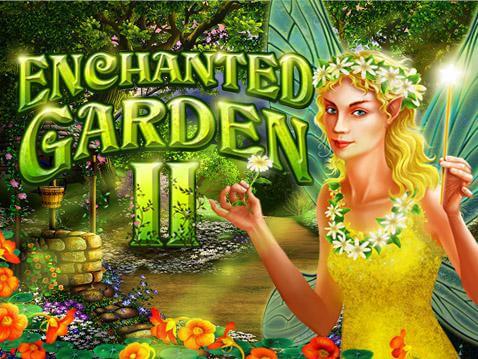 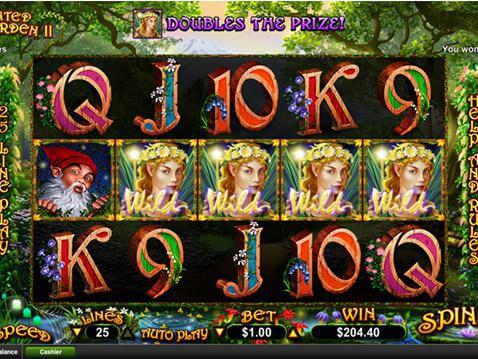 A trip through a magical forest of fairies is, by definition, super easy. After all, with pixies around to cast their spells, you don’t really need to know much. And that’s definitely the case in Enchanted Garden II, one of the easiest games to play at Slots of Vegas. Start off by choosing the number of lines you want to play (anywhere from 1 to 25). Then, choose your bet per line. Your bet per spin is calculated by multiplying your bet per line by the number of lines in play. To lock in your bet, click the Spin button. The reels will do their thing, stop automatically, and award you for any wins. Some symbols pay out more than others. You can click the Help icon in the game anytime to see how much certain symbols are worth.

It’s easy to be tempted by variable payline games. Enchanted Garden II is one of those, which means you can play anywhere between one line and all 25. If you’re a new online slots player trying to stretch your bankroll, you might prefer to lower your payline number. That’s actually not the best move. If you’re trying to stretch your bankroll, lower your bet instead and keep your paylines set to the max. Otherwise, you could end up missing out on lining up symbols on a payline.

Scatter Symbol: The Garden symbol is your scatter symbol. When you hit a Garden symbol on the first reel along with a Fairy Princess symbol on the fifth reel, you’ll get to play one of two bonus rounds. Substitute Symbol: The Fairy Princess is the substitute symbol. You can think of this as a wild symbol. She can sub in for all other symbols except for the scatter symbol. AutoPlay: For a faster trip through the forest, turn AutoPlay on. The game will take your last used bet and spin for you automatically. Then, after paying you out for any wins, it’ll spin for you again and again.
EXCLUSIVE 250% BONUS + 50 FREE SPINS
CODE: WILD250