Have you been practicing? Because you’re about to play in the sportiest slot game contest of all! Football Fortunes brings you to an emerald green pitch where you’ll play to win huge prizes and fame and fortune.

It’s football season all year round thanks to the all-new slot game from Realtime Gaming. Packed with 2 jackpots, and multiple gameplay modes, you’ll never get bored playing this awesome new slot – football fan or not!

No surprise here – Realtime Gaming’s new slot experience comes packed full of high-definition graphics, visuals, and sound effects, as well as an exciting theme. Joined by a talented group of teammates, rowdy, supportive fans, and the best equipment money can buy, you’ll battle your opponents for huge jackpots and payouts – so get ready to leave it all on the pitch!

Football Fortunes runs on 5 reels with 50 fixed paylines. It’s the perfect slot for football fans who are wanting just one more way to incorporate football into their lives, and even have their chance at success and fame. This exciting slot is set right on a professional football pitch, giving you a taste of the adrenaline that pro footballers feel on a daily basis.

The varying gameplay modes and bonus features of this slot ensure that you’ll never grow bored and the slots won’t feel redundant. The Mascot Scatter and Golden Ball Substitute grant you double and tripled prizes and enough free games to keep the ball in play for hours!

Spend your off season racking up some major points and jackpots with Realtime Gaming’s new slot game, Football Fortunes. Play now for free or for real money at Slots of Vegas!

This fast-paced, football slot game contest is set on 5 reels and 50 fixed paylines. Play online today for free or for real money! Sign up with a $30 deposit for a 300% No Max Cashout plus 30 spins on Football Fortunes. 3x redemptions. Simply use the code 300FORTUNES.

Substitute Rules:
The Golden Ball is a grouped Wild on reels 1 and 5 in normal games. The ball counts for all symbols except the Mascot Scatter. The prize is doubled when a Ball appears in a winning combination.

Rules- All wins are tripled in Rhino Mode only. Ball Wilds can appear grouped on reel 3 during free games. The Penalty Kick Bonus may be won during free games. Any retrigger adds the same number of free games as originally triggered. Free games are played at the bet of the triggering game.

Fortune Feature Trigger and Rules:
Trigger- When playing in Fortune Mode, the Free Games may trigger at the end of any normal game.

Rules- 8 Free Games are awarded when the Fortune Feature triggers. All other rules are as per the Free Games.

Penalty Kick Bonus Trigger and Rules:
Trigger- Bonus Golden Ball symbols may appear on any symbol during Free Games. If the Bonus Ball appears on all reels, the bonus is triggered.

300% No Max Cashout + 30 FREE SPINS Make your deposit and claim your bonus with the Coupon Code: 300FORTUNES Play now 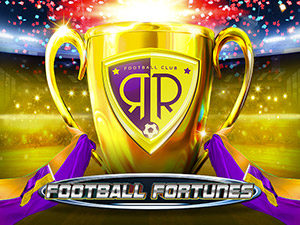 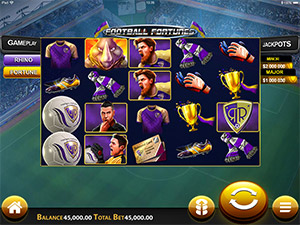 Once you’ve loaded the game, select your bet amount by selecting the + and - symbols at the bottom of the game screen. Once you’ve set your wager amount, click Spin. We advise betting maximum coins to unlock the highest potential payout. It’s only a matter of time before you’re racking up coins, cash, and winning combinations! If you find yourself getting a bit tired from spinning the reels manually, just hit the Autoplay feature to get the reels spinning automatically. From there, you can simply relax and watch the reels do all the work.

Football Fortunes is a 5-reel, football-themed slot game with loads of rewards to be won throughout. There are two local progressive jackpots to be won. The major and minor jackpots reset at $1,000 and $250, respectively. Practice your penalty kicks and get ready to be a superstar footballer in the all-new Football Fortunes slot game. Available now at Slots of Vegas. Download it to your PC, Mac, or mobile device today.