Take a journey into the enchanted forest and prepare to uncover incredible hidden treasures in this all new slot game from Realtime Gaming. Those geniuses are at it again with Frog Fortunes. With it’s high definition graphics and entrancing sound effects, you’re sure to have a satisfactory slot game experience. The shining, regal frog lord will make all your wonderfully weird dreams come true when you conjure up the right symbols on his magical reel.

Frog Fortunes runs on 5 reels with 243 all-ways pay paylines and is a low volatility slot making it perfect for those wanting to sit back, have a good time, and not risk losing a ton of their bankroll. The unique hexagonal reels add some major pizzazz to Frog Fortunes; you won’t want to miss this! These quirky reels are set deep in the forest in front of the golden frog who is master of the reels. You will enjoy calming yet stimulating music and captivating visuals that make you feel as if you are really on an adventure of your own.

Frog Fortunes features cascading reels and exploding symbols – you will certainly never be bored. The symbols are made up of various gemstones and exploding symbols can appear randomly at any time throughout the game. When the symbol explodes, all symbols affected by the blast will be replaced with the same symbol. If a win is triggered as a result the cascading reels feature will also be triggered.

The frog lord will reward you often and you can receive a win as big as 150 times your bet. Free Spins are available to guarantee your fun never stops. Play Frog Fortunes today at Slots of Vegas for one of the most ‘ribbiting’ slot experiences.

This enticing slot game adventure begins with 5 reels and 243 all ways pay paylines. Play online today for free, as well as for real money! Sign up with a $30 deposit for a 300% No Max Cashout plus 30 spins on Frog Fortunes. 3x redemptions. Simply use the code FROGGY300.

Exploding symbols can appear randomly on the reels at any time throughout the game. Symbols will explode with a random blast pattern. 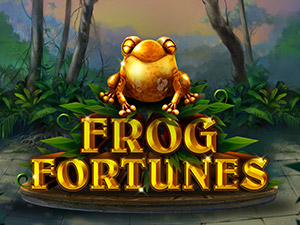 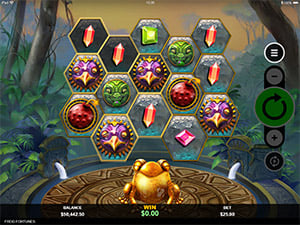 Once you’ve loaded the game, select your bet amount by selecting the + and - symbols at the bottom of the game screen. Once you’ve set your wager amount, click Spin. We advise betting maximum coins to unlock the highest potential payout. With a low volatility slot like Frog Fortunes, you will soon be winning rewards and racking up cash, coins, and free spins. If you find yourself getting a bit tired from spinning the reels manually, just hit the Autoplay feature to get the reels spinning automatically. From there, you can simply relax and watch the reels do all the work.

Frog Fortunes is a 5-reel slot game with loads of gemstones, animals, and more exciting forest symbols and graphics. It’s a low volatility slot, so no huge jackpots, but Frog Fortunes will payout often, and has a top reward of 150 times the bet. So, take this adventure into the magical forest and see what the golden frog has in store for you. Play at Slots of Vegas – download it to your PC, Mac, or mobile device today.