Fruit, football and amazing prizes are tossed together at our Fruit Bowl XXV slot machine. This is a hilarious game with not one but two different random progressive jackpots up for grabs. The "Fruit Bowl" bonus feature is activated whenever there are three or more of the "Fruit Bowl XXV" scatter symbols appear and allows you to get past as many of the fruit linebackers as you can! During the bonus round you can activate the win-win feature, which takes effect when you play 25 paylines. So, if you don't get anything to speak of in the bonus feature the win-win is there to make sure that you get a good prize nonetheless. The win-win allows you to get as much as 250x your initial bet. Don't miss your chance to score two progressive jackpots. Play Fruit Bowl XXV Now!

Experience a game of football like no other; the crowd is cheering for the team to conquer the field with a touchdown. Fruit Bowl XXV takes thematic slots to a whole new level of excitement with added features that give away up to 25 times a bet during free games. Run those lucky yards and unlock the Win Win Feature as well as two progressive jackpots that give away great cash prizes as you move through the defense to claim the championship ring.
250% no max bonus+30 free spins Make your deposit and claim your bonus with the Coupon Code: FBOWL250 Play now 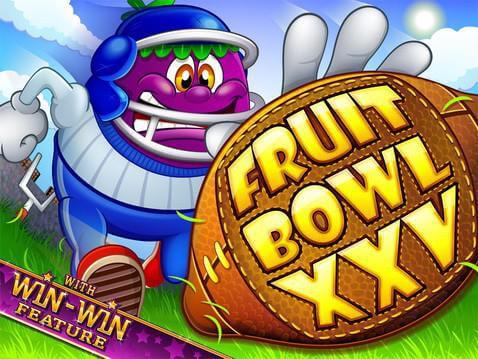 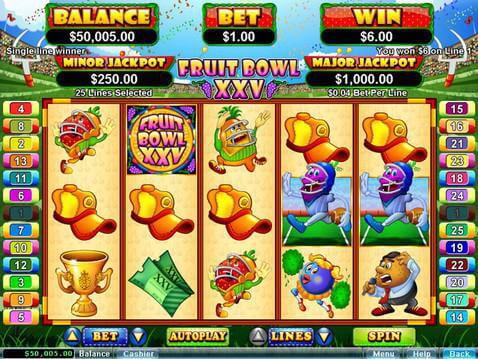 When dealing with a thematic slot machine for the first time remember that the payout percentage tends to be higher in proportion to the wagering amount. A high bet will boost the odds more favorably for you as the chances of hitting special bonus rounds result in a more dynamic gaming run. Be sure to read the rules first to ensure you have a good knowledge of every prize and how much is it worth in terms of cash awards. Practicing on our free slots section will also help you understand the game better. If a bonus round pops up it is wise to know exactly what you are aiming for; an in-depth knowledge makes the game more fun and exciting.