Get on the minecart and prepare for an exhilarating underground journey in Goblins: Gluttony of Gems, a brilliantly entertaining new slot game from Realtime Gaming. Every spin of this 5-reel, 50-payline game delivers next-level action, enjoyment, and prizes. As you spin the reels and venture further into the mine, you’ll need to line up symbols like multicolored gems, crystal shards, lit-fused bombs, coins, and sparkling card suits and turn them into winning combinations to trigger payouts and the game’s several epic bonus rounds.

As you might anticipate from a group of wealth-obsessed goblins, the biggest prizes to play for have been stowed away for players to locate in the bonus rounds. To trigger these exciting events, you'll need the assistance of the Gold Coins and the Minecart Scatter. One of two Free Games options—Gold Coins or the Wild Reels feature—is made available to players when three or more of these shiny gem-filled Minecart icons appear.

Both features provide the player 6 Free Games instantly, along with the opportunity to accumulate additional rewards throughout the bonus round. A Hold and Spin feature may also be triggered during either Free Games round, giving players the chance to earn Re-Spins and win the game’s Jackpot if 15 Gold Coins fill all positions on the reels.

The Goblins Wild, which replaces all other symbols on reels 2 and 4 with the exception of the Minecart and Gold Coins, is the other magical symbol to keep an eye out for in this intriguing new slot. To aid gamblers in forming a winning combination, the Goblins will also nudge to cover the entire reel. The top award in this fantastic new slot game is 50,000 times the bet per line. Join the goblin brigade and play for huge wins now at Slots of Vegas!

This dazzling new slot game begins with 5 reels and 50 paylines. Play online today for free or for real money! Sign up with a $50 deposit for a 200% No Max Cashout + 50 Free Spins on Goblins: Gluttony of Gems! Subject to x15 playthrough. Simply use the code GOBLINS

Rules of Goblins: Gluttony of Gems

Scatter Pays: 3 or more scattered Minecarts appearing on a base game triggers a choice of 2 features.

200% NO MAX CASHOUT + 50 FREE SPINS Make your deposit and claim your bonus with the Coupon Code: GOBLINS Play now 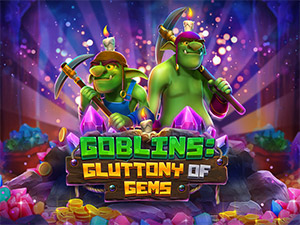 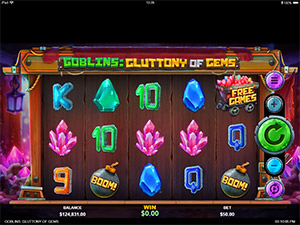 Once you’ve loaded the game, select your bet amount by selecting the + and - symbols at the bottom of the game screen. Once you’ve set your wager amount, click Spin. With a slot like Goblins: Gluttony of Gems, your best bet is to wager maximum coins. This sets you up for winning and being able to claim the game’s top reward.

Goblins: Gluttony of Gems is a 5-reel slot game with pristine, high-definition graphics, suspenseful sound effects, plus bonus features with Free Games and excellent rewards. The top prize is 50,000 times the bet per line, and the game includes two Free Games features which players can choose from when 3 or more Minecart Scatters line up anywhere on the gameboard. The Goblin is the Wild which replaces all symbols in the game when it lands on reels 2 and 4. It will also nudge to cover the entire reel and help players form a line win. The Grand Jackpot may be won when all 15 positions are filled by the Gold Coins during the Hold and Spin feature. The top award is 50,000 times the bet per line. Play Goblins: Gluttony of Gems now at Slots of Vegas! Available for download on your PC, Mac, or mobile device.