Hit the high seas for a pirate adventure with the world's richest pirate – Goldbeard! While other pirates where known for their ferocity or bravery Goldbeard is famed for his sheer wealth. So, if you're ready for adventure come aboard matey! This 20 line slot game gives players the option to make bets as low as one cent or as much as one hundred dollars. Grab your spyglass and keep an eye out for the wild card pirate Goldbeard as well as the gold coin scatter symbol. If you prefer to use play automatically then hit the "autoplay" button. If you want to deactivate autoplay while it is still running then simply hit the "stop" button. Join Goldbeard and Sail the Seven Seas for Riches and Fortune. Start Playing Goldbeard Now!

When it comes to Goldbeard slots its all about pirates and immense treasure! Pirates have menaced the high seas for as long as there has been transport on sea. The earliest records of pirates go back to the 13th century. Stories about mysteries surrounding gold captured and hidden by pirates have been doing the rounds of gatherings since time immemorial. They were believed to be bounty hunters of sunken treasure and ruthlessly merciless. Our Goldbeard however is not such a character. The one legged, one eyed shabby looking pirate is willing to give you a generous share of his loot!
250% no max bonus+30 free spins Make your deposit and claim your bonus with the Coupon Code: GBEARD250 Play now 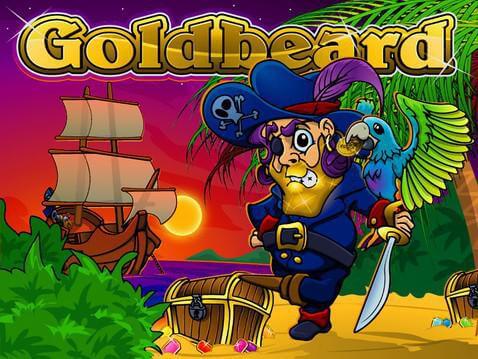 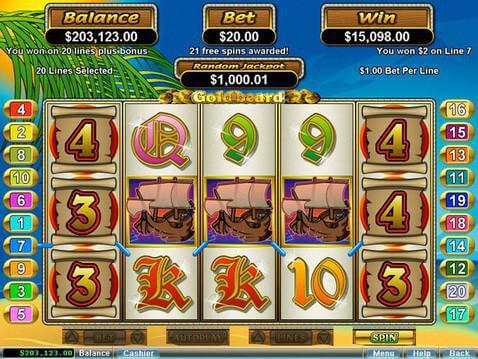 Goldbeard is a 20 pay line online casino slots game, and your bet gets divided equally on the number of lines you choose to play. You can choose your bet from $0.01, $0.02, $0.05, $0.25, $0.50, $1.00, $5.00 or a maximum of $10.00. Adjusting your bet is pretty easy. You can also use Auto-play with preconditioned settings to start and stop the game at your convenience. The game will progress nonstop until you stop the game manually; run out of money or the game reaches the condition that you set Auto-play for. You can choose the number of lines that you want to play. In case you want to practice before playing for real money, you can do so at our free slots section.

In Goldbeard with the many scatter, wild and multiplier symbols, the payouts are really generous. You can win a minimum of four and maximum of twenty four free games if you get the Goldbeard symbol on reels one and five. All symbols pay left to right except the scattered Gold Coin. The Gold Coins pay both left to right and right to left. The wins on different lines are added in this online slots game. Scatter wins are added to line wins and are multiplied by the total bet. Line wins are multiplied by bet per line. The highest win is always only on a single payline. The maximum win per spin is 40,000 times your wager per line bet.

Payline: The term payline is used to denote the amount of lines across the screen on a slot machine. Free Spins: Free spins are the free games that can be won by satiating certain preset requirements. Will symbol: The Goldbeard symbol is the wild symbol in this online casino slots game. If the Goldbeard symbol appears on reel 3, it can give up to 24 free games. As a rule, all winnings are tripled during the free games. Scatter symbol: In Goldbeard online casino slots, gold coin is the scatter symbol. It awards a special payout every time it appears on the slots game.
EXCLUSIVE 250% BONUS + 50 FREE SPINS
CODE: WILD250