The legendary Golden Lotus brings luck, happiness and prosperity to its owner but finding one isn't easy. If you'd like to embark on the search for the Golden Lotus then this game is for you! Golden Lotus is a 5 reel, 25 line slot game which allows players to bid as little as one cent or as much as one hundred and twenty five dollars. As you journey on your quest be sure to look for the wild card Golden Lotus symbol as well as the White Lotus scatter to help you on your way. To start enter the amount to wager and the number of lines you want to play and hit "Spin" to begin. Withness how your Bankroll blossom into a beautiful fortune. Win Big With Golden Lotus Now!

Lotus flowers for years have always been associated with good luck. Now, you'll be able to prove that to be true by playing Golden Lotus. Golden Lotus is going to make you the big winner in a game that is filled with lots of excitement and thrills. Golden Lotus is a five reel slot machine that offers amazing payouts, two free game features and huge Progressive Jackpot. This game is also available to play online for free on our Instant Play section, where you can play free slots without any restrictions.
250% no max bonus+30 free spins Make your deposit and claim your bonus with the Coupon Code: GOLDENLOT250 Play now 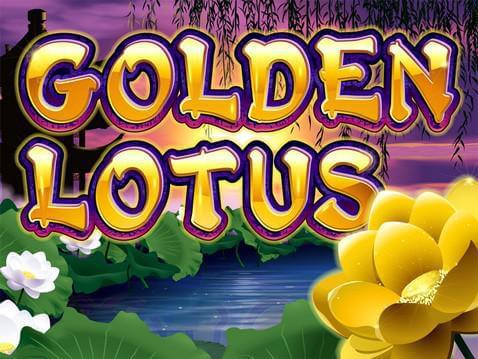 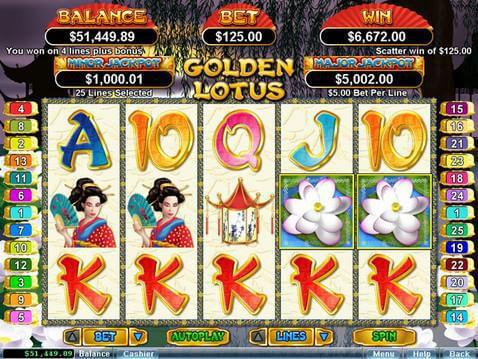 Golden slot machine is played at a maximum 25 lines and a max bet per line per $5. You may spin the reels by simply pressing the Spin button or you can have the game spin the reels for you by using the Autoplay feature. The "Golden Lotus" serves as a wild icon, substituting for any other symbol in a winning combination except scattered "White Lotus". Three or more "Golden Lotus" appearing anywhere will trigger the "Chinese Garden Feature" during which all "White Lotus" symbols are changed to the "Golden Lotus" or "Logo" symbols. The "Chinese Garden Feature" will award free games during which prizes will be multiplied up to 5 times. Three or more scattered "White Lotus" appearing anywhere will trigger the "White Lotus Feature". "White Lotus Feature" will award 8 free games with free game multipliers of up to 5x. This feature may be re-triggered. Golden Lotus Progressive Jackpot is triggered totally at random, regardless of the amount wagered.

Substitute: the substitute icon serves as a wild symbol substituting for any other symbol in a winning combination except scatters. Scatter: three or more scattered symbols appearing anywhere will trigger the Bonus Feature. Progressive Jackpot: the Progressive Jackpot is triggered at random regardless of the amount wagered.
EXCLUSIVE 250% BONUS + 50 FREE SPINS
CODE: WILD250