The planets are in retrograde and the stars are aligned! Hyperwins is the brand-new retro-style slot sporting 5-reels, cosmic symbols, bonus rounds, and stacks of rewards on every spin. The gameboard is filled with precious stones and gems like emeralds, rubies, sapphires, amber crystals, and other jewels that make this slot rich, prosperous, and of course, extremely fun to play.

The Wild symbol in this slot is the Moon, which substitutes all other symbols apart from Bonus Stars. The Scatter symbol is the Star, which awards 5, 10, 15, 20, 25, 50, 100, or 200 Free Games when 3, 4, 5, 6, 7, 8, or 9 Stars appear in a winning combination, respectively. If 4 or more Stars appear on the gameboard before the Free Games feature is triggered, the Hyper Prize feature is activated, giving players the chance to win instant prizes up to 1000x times their bet from 9 different locations on the reels!

The fun and rewards don’t just stop there either! Other Bonus Rounds include the Hyperwin Bonus feature, which uses the lunar powers of the Moon to transform 3 of the same symbols into Wilds, while the Lucky Feature can be triggered during any random spin and activates either Free Games or the Hyper Prize Feature.

The top award in this spectacular slot game is 5,000 times the bet per maximum spin, so be sure to make the most of your bets to give yourself the best chance at hitting a huge payout! The game is available to play for real money and for free via desktop, mobile, and tablet. Download or play directly through your browser and get ready to rack up the most astronomical wins! Play the dazzling new Hyperwins slot game at Slots of Vegas today!

This cosmic journey begins with 5 reels and multiple paylines. Play online today for free or for real money! Sign up with a $30 deposit for a 200% No Max Cashout + 30 Free Spins on Hyperwins plus x3 redemptions Simply use the code HYPER200.

Wild Rules: Wild substitutes for all other symbols except Bonus Stars.

Hyperwin Bonus Feature Trigger: If 3 of the same symbols (without wilds) appear on the Bonus Line they transform into Moons, before pays are awarded.

200% NO MAX CASHOUT + 30 FREE SPINS Make your deposit and claim your bonus with the Coupon Code: HYPER200 Play now 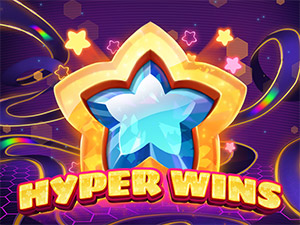 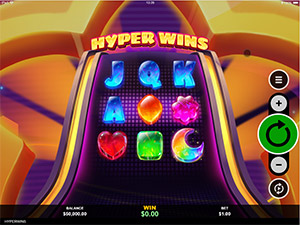 Once you’ve loaded the game, select your bet amount by selecting the + and - symbols at the bottom of the game screen. Once you’ve set your wager amount, click Spin. With a slot like Hyperwins, your best bet is to wager maximum coins. This sets you up for winning and being able to claim the game’s top reward.

Hyperwins is a 5-reel slot game with pristine, high-definition graphics, electro sound effects, plus bonus features with Free Games and excellent rewards. The top prize is 5,000 times the bet per maximum spin, and the game includes a Free Games Trigger Feature where players can pick up to 200 Free Games and double their winnings. Hyperwins also features a Hyper Prize feature, a Hyperwin Bonus feature, plus a Lucky Feature which can may be triggered during any random spin. Play Hyperwins now at Slots of Vegas! Available for download on your PC, Mac, or mobile device.