Some claim the Loch Ness Monster is pure myth. Others have spent nearly a century trying to prove its existence through photographs and film. At Slots of Vegas, we're ending the debate for good by paying out big rewards for those who can capture the mythical sea creature. With two jackpots including a major and a minor one, the Loch Ness Monster is waiting to rear his head and splash you with big money when you least expect it. But you don't have to wait for the jackpot to find his loot. The 25-payline game awards up to 5,000 times your bet per line. And it includes a free game feature where eight games are awarded featuring double prizes. Uncover the mystery and take the loot now!
250% no max bonus+30 free spins Make your deposit and claim your bonus with the Coupon Code: LOCHNESS250 Play now 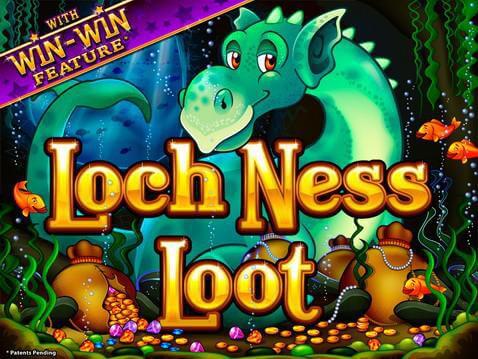 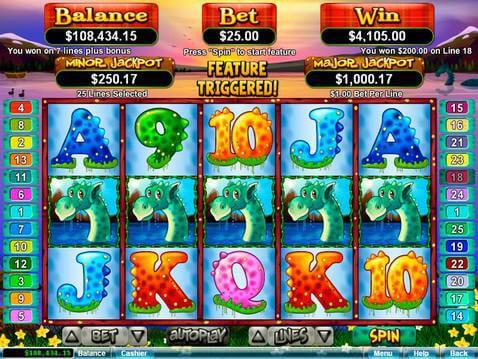 How to play Loch Ness Loot:

Finding the Loch Ness Monster in Scotland might be hard, but finding Lochie and his loot at Slots of Vegas is incredibly easy. First, choose the number of credits you'd like to bet. Then, choose the number of paylines you'd like to play. With your bet locked in, hit Spin and enjoy the search for Lochie and his riches. You'll want to watch out for the Scatter symbol. In Loch Ness Loot, look for the Treasure. If you land on three of them from left to right, you'll score eight free games. During the free games, all prizes will be doubled. Note that the free games will be played using your last locked-in bet before you entered the Free Games feature. Loch Ness Loot also includes a Win-Win bonus feature. It gets activated only when 25 lines have been played, so if you want to be eligible for the feature, make sure you've locked in 25 paylines. You'll be able to access the Win-Win feature at the end of the Free Games feature if the number of free games won is eight times the triggering bet or less.

Lochie is incredibly quick. That's why he's evaded capture for decades and decades. So if you want to speed up the pace and keep up with his agility, take advantage of the Autospin feature. Instead of having to manually lock in your bet, just select the number of paylines you want to play, and hit Spin, Autospin takes care of doing it all for you. Using your last locked in bet and payline selection, the software will automatically spin for you—every time. That means there's no waiting between payout and spins. And that means less opportunity to miss a big jackpot.

The hunt for Lochie is always an adventure. If you're off to Scotland to find the real thing, it takes years of planning and tons of time to develop a strategy to capture her. But if you'd rather hunt for Lochie's riches online in Loch Ness Loot, it's much easier, especially when you understand these terms: Jackpots: Loch Ness Loot is all about finding something when you least expect it. That's why the game includes two jackpots—a major jackpot that resets at $1,000 and a minor jackpot that resets at $250. The jackpots are awarded randomly, and if you win one you'll know about it at the end of a game. Symbol In Loch Ness Loot, the term scatter is incredibly accurate. The fabled sea creature is known for popping his head and then running off, forcing those who are trying to prove his existence and win big money to wait another day. In Loch Ness Loot, look for the Treasure symbol. Finding three Treasure symbols will send you into Free Game mode. Substitute Symbol:If you land on Lochie, you could end up hitting it big. That's because it'll substitute for any other symbol, including the Treasure symbol.
EXCLUSIVE 250% BONUS + 50 FREE SPINS
CODE: WILD250