Arm yourselves and get ready for a showdown with the world’s most cute and cuddly assassins in Realtime Gaming’s epic new slot game, Meerkat Misfits. This 5-reel slots adventure will have you teaming up with Muscle, Scout, Hunter, and Commander Meerkat in an effort to rob the reels of precious bounty like Free Spins, Multiplying Wilds, and a mighty top prize

Featuring 30 fixed paylines, this explosive new game will have you lining up lucky symbols to trigger super-fun bonus rounds and the chance to multiply your winnings. The game’s high-paying symbols are the four meerkats, which each act as a Multiplying Wild and can substitute low-paying symbols in the game. Other than the Free Games Scatter, you can expect to see road signs, ostriches, knife sheaths, harpoons, and bear traps make their way onto the reels.

The Wilds will only appear on reels 2, 3, 4, or 5, and prizes of up to x5 are awarded, respectively. When 3 or more of the Free Games symbols appear anywhere on the game grid from left to right, the Free Games with Stages feature is triggered. During this feature, players will be able to progress through 4 different bonus stages where they can earn Free Games and additional Multipliers. The progression through the different stages is independent of the bet level. Primary game reels are different per stage.

On top of Multiplying Wilds and exciting bonus stages to look forward to, players also have the chance to get their furry paws on a massive 2,000 times the total bet! Take a wild ride up the interstate, and get ready to loot the reels and take home an abundance of prizes and cash in the brand-new Meerkat Misfits slot game, now available to play at Slots of Vegas casino!

This crazy fun slot game begins with 5 reels and 30 fixed paylines. Play online today for free or for real money! Sign up with a $50 deposit for a 185% No Max Cashout + 40 Free Spins on Meerkat Misfits with no redemption limit! Subject to x10 playthrough. Simply use the code MISFITS.

The 4 possible stages are:

185% NO MAX CASHOUT + 40 FREE SPINS Make your deposit and claim your bonus with the Coupon Code: MISFITS Play now 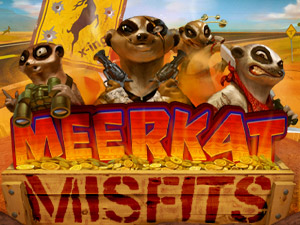 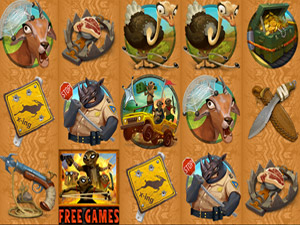 Once you’ve loaded the game, select your bet amount by selecting the + and - symbols at the bottom of the game screen. Once you’ve set your wager amount, click Spin. With a slot like Meerkat Misfits, your best bet is to wager maximum coins. This sets you up for winning and being able to claim the game’s top reward.

Meerkat Misfits is a 5-reel slot game with pristine, high-definition graphics, explosive sound effects, plus bonus features with Free Games and excellent rewards. The top prize is 2,000 times the bet and the game includes Multiplying Wilds that multiply your prizes by x2, x3, x4, or x5, respectively. These Multiplying Wilds can also substitute all other symbols in the game besides the Scatter. Lining up 3 or more Free Games symbols triggered the Free Games with Stages feature, allowing players to earn extra Free Games and Multipliers. Play Meerkat Misfits now at Slots of Vegas! Available for download on your PC, Mac, or mobile device.