Step into the mystical world of Norse mythology and get ready to conquer the ancient worlds in Realtime Gaming’s brand-new slot game, Nine Realms. As you join your fellow warrior comrades on the battlefield, you’ll be opening the great portals and collecting the most amazing prizes along the way, including Free Games, cash, and the chance to win a mighty top reward.

While there is no Wild in this game, you can expect to see low-paying symbols of cards valued from 10 to Ace, alongside the Free Games Scatter symbol, the Helmet symbol, and the stacked Warrior icon. If 3 Scatters land on reels 3, 4, and 5, you’ll open up the Free Games Feature where 7 Free Games are instantly awarded. During this feature, the gameboard expands from the standard 3x5 layout to 7x5, which increases the winning opportunities from 243 to a whopping 78,125.

The Gatekeeper Portal may be activated on any random spin during the base game or the Free Games feature. Once activated, helmets may appear in random locations on the game grid and morph into Warrior symbols to increase your chances of forming a line win. The top award in this spell-binding new slot game is 2,500 times the base bet. Play Nine Realms for real money at Slots of Vegas today!

This mystical new slot begins with 5 reels and 243 all ways paylines. Play online today for free or for real money! Sign up with a $50 deposit for a 200% No Max Cashout + 50 Free Spins on Nine Realms. 10X Playthrough with no redemptions. Simply use the code NINEREALMS.

200% NO MAX CASHOUT + 50 FREE SPINS Make your deposit and claim your bonus with the Coupon Code: NINEREALMS Play now 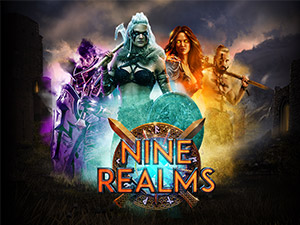 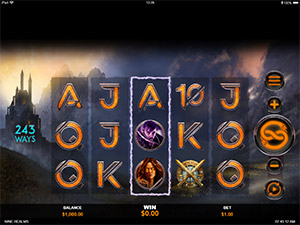 Once you’ve loaded the game, select your bet amount by selecting the + and - symbols at the bottom of the game screen. Once you’ve set your wager amount, click Spin. With a slot like Nine Realms, your best bet is to wager maximum coins. This sets you up for winning and being able to claim the game’s top reward.

Nine Realms is a 5-reel slot game with pristine graphics, gripping music and sound, plus 3 exciting bonus features with great prizes to win. The top award is 2,500 times the base bet, and the game includes a Free Games feature which is triggered when the Scatter appears on reels 3, 4, and 5. There is no Wild symbol in this game, however, the Warrior symbol may appear stacked on the reels and morph the Helmet symbol during the Gatekeeper Portal feature. Enter though the portal and get ready to battle your way to victory in the enchanting Nine Realms slot, now at Slots of Vegas! Available for download on your PC, Mac, or mobile device.