The luck of the Irish is on your side! Follow the rainbows straight into pots of gold and major jackpots in the all-new slot game from Realtime Gaming: Paddy’s Lucky Forest. Once again, Realtime Gaming has released a magical slot game with an exciting theme, stunning graphics, and captivating characters.

Paddy’s Lucky Forest runs on 5 reels with 720 ways to win. The lucky leprechaun is constantly loading up the reels with good fortune just for you – multiple jackpots, thrilling and unique bonus features, Free Games, and more! Paddy’s Lucky Forest is set against the enchanting background of an emerald Irish forest where you’ll enjoy lively animations and lucky symbols.

The golden clover is the Wild symbol, and the pot of gold is the Scatter. These symbols are joined by colorful fairies, golden horseshoes, rainbows, gemstones, and an enthusiastic leprechaun. When 3 or more pot of gold Scatters appear on reels 2, 3, and 4, the Pick Bonus Feature is triggered and awards you with Free Games and/or Instant Prizes.

When luck is on your side, it’s more than worth it! Three progressive jackpots (major, minor, and mini) can be randomly triggered during the base game, where the reset amount is $400, $100, and $40, respectively.

Your leprechaun pal rewards you generously with a top reward of 1,440 times the bet per line! Play Paddy’s Lucky Forest today at Slots of Vegas for the chance to spin up some life-changing wins!

This enchanting slot game adventure begins with 5 reels and 720 ways to win. Play online today for free, as well as for real money! Sign up with a $30 deposit for a 300% No Max Cashout plus 30 spins on Paddy’s Lucky Forest. 3x redemptions. Simply use the code PADDY300.

300% NO MAX CASHOUT + 30 FREE SPINS Make your deposit and claim your bonus with the Coupon Code: PADDY300 Play now 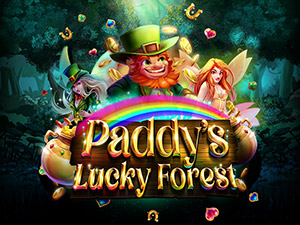 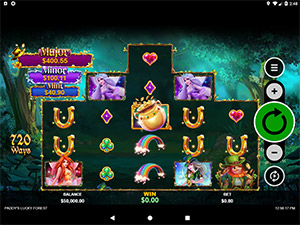 Once you’ve loaded the game, select your bet amount by selecting the + and - symbols at the bottom of the game screen. Once you’ve set your wager amount, click Spin. We advise betting maximum coins to unlock the highest potential payout. It’s only a matter of time before you’re stacking up gold coins, hitting Free Games triggers, and joining the friendly leprechaun in a victory jig! If you find yourself getting a bit tired from spinning the reels manually, just hit the Autoplay feature to get the reels spinning automatically. From there, you can simply relax and watch the reels do all the work.

Paddy’s Lucky Forest is a 5-reel slot game adventure with tons of golden rewards, Free Games, and Bonus Features to be won throughout. There are THREE progressive jackpots with a major, minor, and mini reward, plus a monumental 1,440 times the bet per line! Set forth into the lush Irish forest and prepare for some serious money magic in the all-new Paddy’s Lucky Forest slot game at Slots of Vegas. Download it to your PC, Mac, or mobile device today.