Travelers have searched far and wide, and have stumbled across hidden Asian treasure deep in the heart of Eastern Lands. A mythical realm of lucky symbols and showered golden coins await for those who brave enough to seek it. Join a rousing quest to uncover Băo, the ancient Chinese word for treasure. Its appearance entitles the player to select from golden coins for a chance to shower in huge rewards. Do you think you think you have what it takes to claim fortune? Plentiful Treasure is the epic 5-reel slot machine with a staggering 243 All Ways Pays paylines, designed to plunge you into the depths of exotic treasure with an Eastern flair. This incredible slot game delivers phenomenal rewards with the help of wild Băos and enchanting Pearls all designed to increase your wins, and send you on a trek for the grandest rewards of all, one of four jackpots! This thrill ride of a casino game experience is perfect for new players and seasoned players alike, and is quick to delight with its massive winning combinations. The Băo and Pearl are the substitute symbols, while the Tripod is the scatter. The appearance of three or more scatters activates 8 free games with a chance for retriggers. The appearance of the Wild Băo on reels 2, 3, and 4 will trigger the Golden Coin Feature, which earns you the chance to win: a Grand, Major or one of two Minor Jackpots. The top reward is 50,000 times the bet per way. Reap the rewards of fortune as you play free games and spins, stunning Pearl multipliers and enchanting golden coins. The top reward of 50,000 times the bet per way, so it won’t be long before Plentiful Treasure starts to live up to its name! For a minimum $75 deposit, you can enjoy a 275% No Max Bonus and 50 Free Spins. A deposit of $50-$74 gets you a 250% No Max Bonus and 50 Free Spins on Plentiful Treasure. Redeem Code TREASURE.
250% DEPOSIT BONUS + 30 FREE SPINS Make your deposit and claim your bonus with the Coupon Code: TREASURE Play now 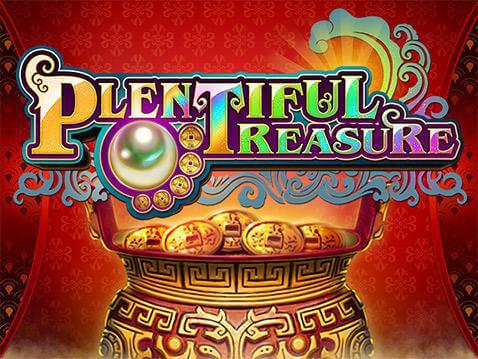 Plentiful Treasure is a 5-reel, 243 All Way Pays, online slot game giving players more than plenty of opportunity to win big prizes with each spin. Customize the bet option to suit your bankroll via the chip icon, and click the Spin icon to play. You can also activate the Autoplay feature in Settings, so you don’t have to click manually. This feature can be turned off during gameplay. The coin size is also adjustable, allowing you to customize the bet size to suit your bankroll.

Plentiful Treasure is designed to accommodate both penny slot enthusiasts and those who like to spend a little bit more on each spin of the reels. This 5-reel, 243 All Ways Pays slot allows you to place a bet to your liking and watch the reels spin. The Autoplay feature comes in handy if you get tired of spinning the reels manually. Select your bet, and start spinning to watch lucky Bǎo and Pearls appear along with Tripod scatters. Earn free games, whopping winning combos and jackpots.

Wild Symbol: Băo, Pearl Scatter Symbol: Tripod Plentiful Treasure allows you to play the Free Games Feature when three or more scattered Tripods appear. Eight free games are awarded when this feature is triggered. During Free Games, A, K, Q, J, 10 and 9 symbols do not appear throughout the feature. Pearl Wilds award by multiplying pay combinations and this incredible slot features the Golden Coin Feature. It is activated with the appearance of the Băo treasure symbol on reels 2, 3, and 4. 12 shiny, golden coins appear on the game screen. Touching a coin will reveal the symbol of an available jackpot. When three matching symbols have been revealed, the corresponding jackpot will be awarded and the feature ends. Plentiful Treasure features four exciting jackpots: Grand, Major, and two Minor jackpots. Winning symbols pay Left to Right, and the top reward is 50,000 times the bet per way. Reap the rewards with gold and fortune playing the Plentiful Treasure slot game!
EXCLUSIVE 250% BONUS + 50 FREE SPINS
CODE: WILD250