Unsheathe your sword and get ready to experience the triumph and exhilaration of Realtime Gaming’s latest Greek mythology slot, Princess Warrior! The brand-new 5-reel slot game based on the divine goddess of war and wisdom Athena, who is here to take you on a magical journey up Mount Olympus to uncover the secrets of the gods and fill your bankroll with an abundance of riches and heavenly rewards.

The Wild in this epic new slot is the goddess Athena herself, which substitutes all other symbols in the game apart from the scattered Princess Warrior game logo. Spin the reels and watch her and her beautiful accomplices stack up the coins and reveal a bounty of bonuses and free goodies including Free Games, bet multipliers, additional Wilds, or a special one-off Olympic prize. Players can take their pick from 1 of 4 prize-raining Free Games Pick Bonus options when 3 of the scattered game logos appear anywhere on the gameboard.

In this lucrative new slot game, a top reward of 96,000 times the bet per line awaits you at the summit. With the all-encompassing powers of the Olympic goddess behind you, it’s only a matter of time before you’ll be filling up on huge cash prizes, Free Spins, and an explosion of bet multipliers. Unleash your inner goddess and play Princess Warrior at Slots of Vegas today!

This ancient Greek-themed slot game begins with 5 reels and 40 paylines. Play online today for free or for real money! Sign up with a $30 deposit for a 300% No Max Cashout + 30 Free Spins on Princess Warrior plus x3 Max redemptions Simply use the code WARRIOR300.

Scatter Rules: 3 Scatter symbols trigger the Free Games Pick Bonus and player is asked to pick one of three features.

Wild Rules: Wild appears only on reel 3 and substitutes for all symbols except Scatter symbol. A full stack of Wild symbols on reel 3 triggers the Princess Warrior feature during Base Game.

Princess Warrior Feature Trigger: The feature is triggered when a full stack of Wilds appear on Reel 3

The Free Games are played at the bet of the triggering spin and the bet cannot be changed. Free Games will end once there are no more Free Games remaining or when the maximum payout is achieved. After all your Free Games have finished, a banner will display your total winnings achieved during this feature.
Free Games cannot be retriggered.

250% NO MAX CASHOUT + 30 FREE SPINS Make your deposit and claim your bonus with the Coupon Code: WARRIOR300 Play now 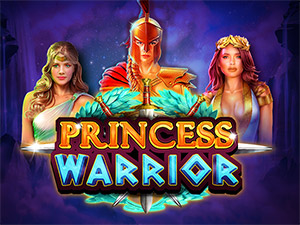 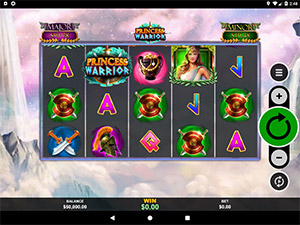 Once you’ve loaded the game, select your bet amount by selecting the + and - symbols at the bottom of the game screen. Once you’ve set your wager amount, click Spin. With a slot like Princess Warrior, your best bet is to wager maximum coins. This sets you up for winning and being able to claim the game’s top reward.

Princess Warrior is a 5-reel slot game with eye-catching graphics, triumphant sound effects, plus bonus features with free games and great rewards. The top prize is 96,000 times the bet per line, and the game includes a Free Games Pick Bonus feature that allows you to pick from 1 of 4 exciting game options and automatically credits the player with 10 Free Games regardless of the option chosen. There is also a special Princess Warrior feature which is triggered when a full stack of Wilds appears on reel 3. Once activated, players are awarded either 2x, 3x, 4x, or 5x multipliers, random wilds on all reels, Wild reel, 1, 2, 3, 4, or 5, or a mighty Olympic reward. See what wealth the beautiful Athena bestows upon you and play at Slots of Vegas today! Available for download on your PC, Mac, or mobile device.