Realtime Gaming is calling all players with a bit of dark Christmas humor to take part in the new Rudolph Awakens slot game from Slots of Vegas! Rudolph Awakens is a 5-reel slot with 30 variable paylines bursting at the seams with Christmas spirit, free games, a gun-toting Santa, and a top reward of 50,000 x the bet per line! The substitute symbol in this game is Rudolph, which substitutes for every symbol in the game apart from the Extra Games symbol. All symbols pay left to right in this game. Rudolph Awakens is a crazy fun slot full of unique bonus features, free games, and a top reward to absolutely die for!

The Free Games feature is activated when Rudolph covers reel 3. Ten free games are automatically awarded when this feature is triggered, with the potential for 3 extra free if the "Extra Games!" symbol appears on both reels 1 and 5 during a free game. Extra Games can be awarded a maximum of 3 times.

Rudolph Awakens is a seasonal slot game that casts out rewards worthy of an explosive Christmas! Players will have a chance to join the sexy elves and avoid the gun-wielding Santa to reach the top reward of 50,000 times the bet per line! Match up winning combinations and find your way to the holly, jolly Christmas of your dreams! Free games and epic multipliers complete this phenomenal new slot game powered by the Christmas gremlins at Realtime Gaming. Play Rudolph Awakens now at Slots of Vegas!

This Christmassy slots game treats players to 5-reels and 30 variable paylines. Play online today for free, as well as for real money! Sign up with a 300% No Max Cashout plus 30 spins on Rudolph Awakens for $30 deposit using code REDNOSE300 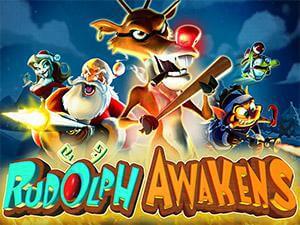 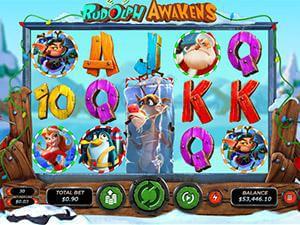 Once you’ve loaded the game, simply pick your bet amount by selecting the + and - symbols at the bottom of the game screen. Once you’ve set your wager amount, click Spin. We advise betting maximum coins to reach the highest potential payout. It won’t be long before you advance through the levels and end up with a Christmas win to remember, free games, and more! If you find yourself getting exhausted from spinning the reels manually, just click the Autoplay feature to get the reels spinning for you! Kick back, relax and watch those mighty wins fly in by themselves!

Rudolph Awakens is a 5-reel slot game with 30 variable paylines. There are huge prizes to be won throughout, including a top reward of 50,000 x the bet per line! Play Rudolph Awakens on your PC, Mac or mobile device today.