Step into Santa's grotto for a heaping helping of holiday cheer, good times, and a flurry of prizes to be won in Santa's Reel Wheel, a brand-new Christmas slot game from Realtime Gaming. In order to get you in the Christmas spirit, Mr. Claus and his elf assistants have been working hard to provide you a game that will warm your heart and give you the chance to fill your bankroll with amazing rewards.

Santa's Reel Wheel is played on a 3x3 layout, and requires you to line up magical symbols to reveal winning combos. There is a special Blue Diamond Wild symbol that substitutes all low-paying symbols in the game apart from the Scatter, which is the Firework.

Five thrilling extra elements are also found in this innovative new game, which can make it snow bonus jackpots and huge cash rewards! Level Up, Santa's Bonus Wheel, Santa's Mega Bonus Wheel, the Free Games feature, and the Fireworks feature are a few of the bonus rounds available. Each one offers the possibility for players to acquire additional in-game benefits and prizes, such as Free Spins, immediate entry to one of the other bonus rounds, or one of the game's numerous jackpots. Santa's Reel Wheel's highest prize is an enormous 50,000 times the bet per line!

Join in the festive cheer and get ready to unwrap a plethora of cash gifts and prizes in the exciting new Santa's Reel Wheel slot game. Play it now at Slots of Vegas!

This heart-warming slot begins with 3 reels and all ways paylines. Play online today for free or for real money! Sign up with a $50 deposit $for a 200% No Max Cashout + 50 Free Spins on Santa's Reel Wheel. Subject to a 15X Playthrough. Simply use the code $SANTA$.

Substitute Rules: The Wild symbol substitutes for all other symbols except Scatters

Level Up!: Triggered when the game starts

200% NO MAX CASHOUT + 50 FREE SPINS Make your deposit and claim your bonus with the Coupon Code: SANTA Play now 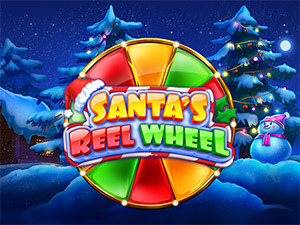 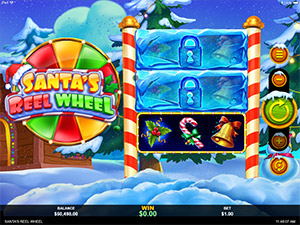 Once you’ve loaded the game, select your bet amount by selecting the + and - symbols at the bottom of the game screen. Once you’ve set your wager amount, click Spin. With a slot like Santa's Reel Wheel, your best bet is to wager maximum coins. This sets you up for winning and being able to claim the game’s top reward.

Santa's Reel Wheel is a classic 3-reel slot game with stunning graphics, soul-warming music, plus bonus features with Free Games and other magnificent rewards. The top prize is 50,000 times the bet, and the game includes several bonus rounds where players can earn Free Games, Bonus Jackpots, and the chance to hit a massive top prize. Step into Santa’s humble abode and join him and his Elf friends for an adventure on the reels in the brand new Santa's Reel Wheel slot, now at Slots of Vegas! Available for download on your PC, Mac, or mobile device.