A delightfully entertaining 3-reel, 1-line video game with a top jackpot is of 10,000 coins. You can play Sevens and Stripes in the download version of the casino or by playing the no-download Flash version that you can access instantly. In this game you can choose from the following coin sizes: $0.05, $0.25, $0.50, $1.00 and $5.00. In order to win the top prizes you need to bet max (3 coins in this game). Once you choose how much you want to bet with and how many coins, just press on the "Spin Reel" button. Play Sevens and Stripes and Get Rewarded For Your Patriotic Pride Start Winning with Sevens and Stripes!

It is easy to see how this three-reel slot came into being. The destiny of many a gambler has been made with the number Seven. With slots becoming a fad in the US, it is apparent that the game is called Sevens & Stripes.  The term Stripes of course alludes to the US flag, which bears red and white stripes as well as blue stars.  All three colors are used in this free slots game, which is named Seven & Stripes, a play on Star & Stripes as the US flag is referred to.
250% no max bonus+30 free spins Make your deposit and claim your bonus with the Coupon Code: SEVNSTRIPS250 Play now 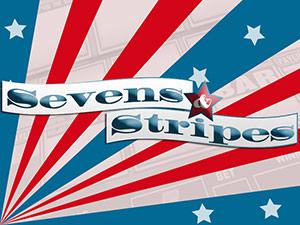 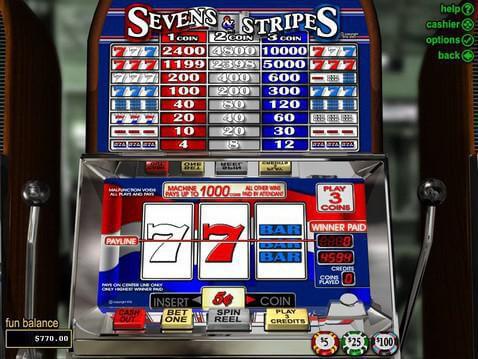 If you wish to boost your odds of hitting the jackpot, wager with a maximum of three coins in the game. Just imagine spinning the highest rewarding combination of three sevens in the sequence of "red seven-white seven-blue seven" with a bet of one coin, only to find that you could have hit the jackpot of 10,000 just by betting two more coins.

Payline: Payline can be defined as the red line in the center of the reels where predefined combinations align to get you various rewards. Coin Size: Coin size refers to the value of the coins you insert in the Sevens & Stripes slot machine to play the game. For instance, if you are playing on the denomination of $1, your coin size is $1. In this classic online slot you can play with the coins in the denominations of $0.05, $0.25, $0.50, $1.00 to $5.00. Bet: Bet is the total worth of coins that you wager in every single game.
EXCLUSIVE 250% BONUS + 50 FREE SPINS
CODE: WILD250