Realtime Gaming is here to reveal the Final Fantasy-inspired Storm Lords slots game from Slots of Vegas! Storm Lords is a 5-reel slot with 50 variable paylines and a flood of free games, re-spins, treasure, coins and a massive top reward! The Wild in this game is the Storm Lords themselves, who act as the substitute for every symbol in the game apart from Scatters. All symbols pay left to right in this game except the Amulet Scatter symbol which pays any. Unlike traditional slot games, Storm Lords is a slot packed full of 3 awesome bonus features which awards even more prizes!

The Treasure Coin feature is activated when 6 or more Treasure Coins appear anywhere on the reels. During this feature, 3 re-spins are awarded when Treasure Coins are held in position. If a new Treasure Coin appears in a spinning position, it remains there to grant you get another 3 re-spins! At the end of the round, all bonuses and prizes are added on to your winning.

Another incredible feature you can expect to come across in Storm Lords is the Wild Reels feature which give 6 free games when Cloud and Wind are held no reels 2 and 4. While the Treasure Spins feature gives another 6 free games, with the chance of retriggers.

Storm Lords is the game that forecasts a blizzard of prizes every day, complete with a top reward of 50,000 times the bet per line! Match up winning symbols and get ready for an explosion of free games and re-spins when you trigger one of the exciting and lucrative features this game promises. Pack your umbrella and rubber boots as you journey through the eye of the Storm Lords, the sensational new slot which engulfs players in a world of enthralling gameplay, colorful graphics and striking sound effects. Storm Lords is the all-new, fantasy slot game available to play now at Slots of Vegas! 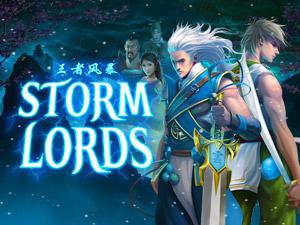 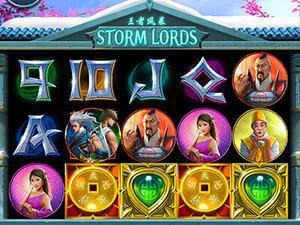 Once you’ve loaded the game, simply pick your bet amount by selecting the + and - symbols at the bottom of the game screen. Once you’ve set your wager amount, click Spin. We advise betting maximum coins to reach the highest potential payout. It won’t be long before you advance through the levels and start to gather a snowstorm of free games, re-spins and more! If you find yourself getting exhausted from spinning the reels manually, just click the Autoplay feature to get the reels spinning for you! Kick back, relax and watch those mighty wins rain on in by themselves!

Storm Lords is a 5-reel slot game with 50 variable paylines. There are huge prizes to be won throughout, including a whopping 50,000 x the bet per line!