Realtime Gaming is here to present the second instalment of the T-Rex II slot game from Slots of Vegas! T-Rex II is a 5-reel slot with 25 variable paylines homing an eruption of free games, magic dinosaur eggs, treasure, and a massive top reward of 5,000 x the bet per line! The wild in this game is the T-Rex monster himself, who acts as the substitute for every symbol in the game apart from scattered Eggs. All symbols pay left to right in this game except the Eggs scatter symbol which pays any. T-Rex II is a slot jam-packed with awesome bonus features, free games, and meaty prizes!

The Free Games feature is activated when 3, 4 or 5 scattered Eggs appear anywhere on the reels; awarding up to 100 free games! During this feature, extra free games can be won, and all free games are played at the lines and bet of the triggering game.

T-Rex II is the game that erupts with a molten shower of rewards every day, complete with a top reward of 5,000 times the bet per line! Match up winning symbols and get ready for a stampede of free games when you trigger 3 or more Eggs anywhere on the reels. Pack your binoculars and get ready to journey to the land before time! Stunning graphics and the most realistic sound effects rumble throughout this exciting new slot! T-Rex II is powered by the hunters at Realtime Gaming and is here to play now at Slots of Vegas! 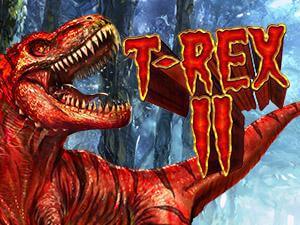 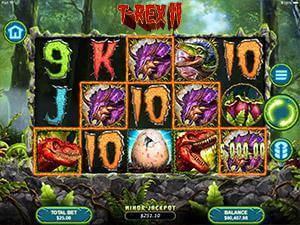 Once you’ve loaded the game, simply pick your bet amount by selecting the + and - symbols at the bottom of the game screen. Once you’ve set your wager amount, click Spin. We advise betting maximum coins to reach the highest potential payout. It won’t be long before you advance through the levels and flow through a lava of treasure, free games and more! If you find yourself getting exhausted from spinning the reels manually, just click the Autoplay feature to get the reels spinning for you! Kick back, relax and watch those mighty wins rumble in by themselves!

T-Rex II is a 5-reel slot game with 25 variable paylines. There are huge prizes to be won throughout, including a top reward of 5,000 x the bet per line! Play T-Rex II on your PC, Mac or mobile device today.