Step into the Gypsy’s magical wagon and prepare to have your future and fortune unveiled in the brand new Tarot Destiny slot game, the prize-packed new slot game from Realtime Gaming. Featuring 5 reels and 10 paylines, this rich and colorful new game will have you using your divination skills to conjure lucky symbols onto the reels that unlock the mightiest of rewards.

On the gameboard, you can expect icons like candles, the wooden wagon, playing cards 9, J, Q, and K, plus packs of tarot cards to float onto the reels. The game awards a payout for three and five-of-a-kind formations for these symbols alone; however, it’s the two Scatters and Wild symbol that unlock the game’s bonus rounds and trigger the most amazing prizes.

The Fortune Teller acts as the Wild, replacing all symbols in the game apart from the Crystal Ball Scatter and the Tarot Destiny logo Scatter. When 3 or more of the Crystal Balls appear anywhere, the Hold and Spin feature is triggered and awards players an instant 20x the total bet. During this feature, players can trigger continuously retrigger a set of 3 Re-Spins if extra Crystal Balls make their way onto the reels. A Diamond Money symbol may also appear on the reels randomly to award a prize value between 100x and 4993x.

This dazzling new slot game begins with 5 reels and 50 paylines. Play online today for free or for real money! Sign up with a $50 deposit for a 200% No Max Cashout + 50 Free Spins on Tarot Destiny! Subject to x15 playthrough. Simply use the code TAROT.

Wild Rules: The Wild symbol substitutes for all other symbols except Scatters

200% NO MAX CASHOUT + 50 FREE SPINS Make your deposit and claim your bonus with the Coupon Code: TAROT Play now 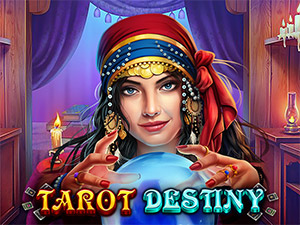 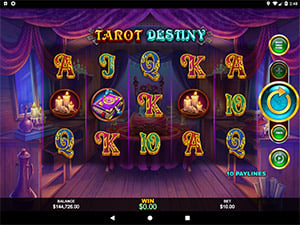 Once you’ve loaded the game, select your bet amount by selecting the + and - symbols at the bottom of the game screen. Once you’ve set your wager amount, click Spin. With a slot like Tarot Destiny, your best bet is to wager maximum coins. This sets you up for winning and being able to claim the game’s top reward.

Tarot Destiny is a 5-reel slot game with pristine, high-definition graphics, mystical sound effects, plus bonus features with Free Games and excellent rewards. The top prize is 50,000 times the bet per line, and the game includes two bonus features which are activated when 3 or more Scatters appear anywhere on the reels. The Fortune Teller is the Wild which replaces all symbols in the game apart from the Scatters. Wilds may also appear during the bonus rounds to award extra Free Games and multipliers. The top award is 50,000 times the bet per line. Play Tarot Destiny now at Slots of Vegas! Available for download on your PC, Mac, or mobile device.