You better watch out. You better not cry. Actually, there’s no reason to cry, so we don’t need to mention it. That’s because in The Nice List online slot game at Slots of Vegas, everyone is in Santa’s good books. If you’re familiar with our other Santa-themed slots games The Naughty List, Naughty or Nice, and Naughty or Nice Spring Break, then you’ll love The Nice List. With two feature games, an innovative All Ways Pays feature, a top award of 18,000x your bet per way, and a Lucky Feature that hits randomly at the end of the game and showers you with gifts, The Naughty List has everything you could want for Christmas. And it’s available to play all year long, so you don’t have to wait for December to enjoy a little extra Christmas cheer.
250% no max bonus+30 free spins Make your deposit and claim your bonus with the Coupon Code: NICE350 Play now 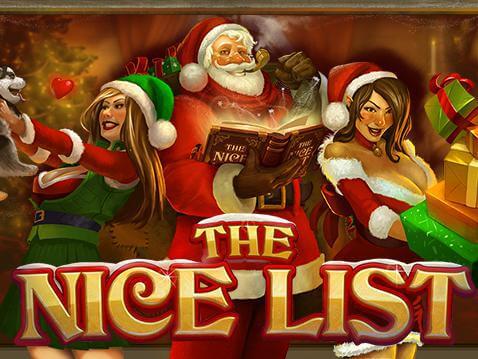 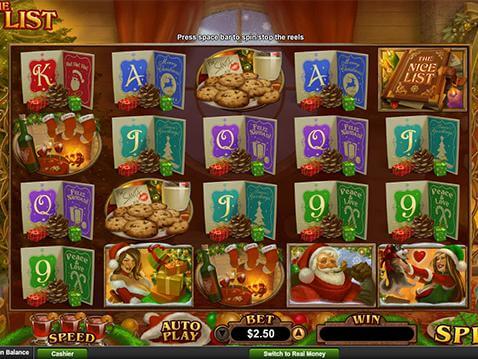 The Nice List is an All Ways Pays game. That means that while there are no paylines to select in the game. The only thing you need to worry about is placing your Bet. You can bet as little as 50 cents per spin. Feel free to raise it by using the Up arrow next to the Bet button. If you bet too much, just use the down arrow. To lock in your bet and jet off to the North Pole aboard Santa’s sleigh, just hit the Spin button. You’ll get paid out for any wins as soon as the reels come to a stop. What’s more, if you hit three Nice List symbols, you’ll get to play one of two bonus rounds where up to 15 free games are awarded off the bat.

The Nice List features two fun bonus rounds, including the Santa Spins Feature and The Nice List feature. You can play one of the feature games by hitting three Nice List symbols during a regular game. When that happens, you’ll be asked to pick one of the symbols to find out which bonus round you’re playing. While the results are completely random, it’s a good idea to keep track of how many of one bonus round appears on the left side of the screen versus the right. You can employ the same strategy Roulette players use to track numbers and hopefully maximize your potential to win in your favorite bonus round.

Substitute Symbol: Santa is your ticket to big Christmas gifts in the real world, and the same is true online. Look for the Santa symbol in The Nice List online slots game. He shows up as a grouped Wild on can sub in for every other symbol in the game, except for the scatter symbol. Scatter Symbol: The Nice List isn’t just the name of the game. It’s also the scatter symbol in the game. Not only do scatter wins get added to All Ways Pays wins and get multiplied by your total bet, but they’re also your ticket to playing a feature game. Lucky Feature: In addition to the two feature games (Santa Spins and The Nice List Features), The Nice List comes with a Lucky Feature game, which triggers randomly at the end of a regular spin. It’s kind of like a jackpot, but it happens way more often than you can imagine.
EXCLUSIVE 250% BONUS + 50 FREE SPINS
CODE: WILD250