Come visit the depths of the sea as you journey to the kingdom of King Triton. Hidden depth beneath lays his endless fortune and now you can take a piece of it thanks to the amazing payouts this entertaining slot game has to offer. Triton's Treasure features 25 paylines and allows players to wager as much and $125 or as little as one cent per spin. While you're exploring be sure to look for the Mermaid scatter symbol and King Triton himself as the wild card. You can play automatically using the "Autoplay" mode as well. Get Ready to Swim in Gold. Play Triton's Treasure Now!

Join Triton, the mythical messenger of the sea, in his underwater journey to help find his lost treasure and you will be handsomely rewarded.  Players who take on the challenge of finding the treasure will find special bonus features helping you earn more free spins, jackpots and special game multipliers.  Activate the Triton bonus feature anytime three or more scatters occur during free games and earn 5 free games with a 1x multiplier. Players looking for jackpots will be pleasantly surprised with special jackpots allowing players to win up to $1,000 in cash.  There's also a random progressive jackpot where players can win thousands of dollars in cash at any given moment. Experience an underwater adventure like no other with Triton's Treasure.
250% no max bonus+30 free spins Make your deposit and claim your bonus with the Coupon Code: TRITONSTREAS250 Play now 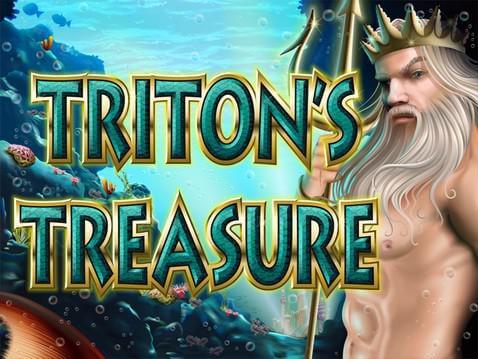 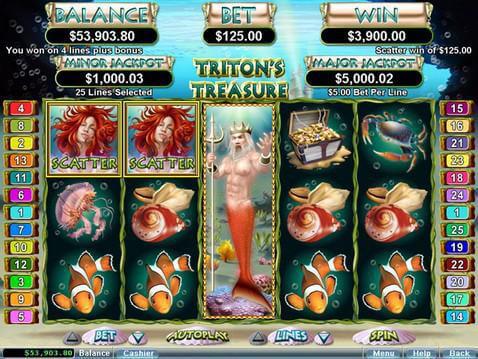 Once you enter the Triton's Treasure game from the casino lobby you can choose the amount of lines you wish to play from 1-25, then select a bet per line from $0.01 to $5. Spin the reels by pressing the Spin Button or you can have the game spin the reels for you by using the Autospin feature. Triton's Treasure offers a Major and Minor Progressive Jackpots which may be awarded randomly at the end of any game regardless of the amount wagered. The "King Triton" symbol will serve as a substitute in any winning combination except for scattered Mermaids. Three or more scattered Mermaids appearing anywhere will trigger the Bonus Feature. The Bonus Feature will award 5 free games with a game multiplier of 1x initially. 1 bonus pick is awarded for each triggering Mermaid. Each pick can be used to add 5 additional free games or to increase the game multiplier by 2.

Make the most of Triton's Treasure by getting three or more scattered Mermaids to appear anywhere as they will trigger the Bonus Feature. It is also very important to know when to stop. If you see yourself on a losing streak, stop for the day and come back some other time when your luck may have changed. Practicing is also vital, make sure to master your skills on our free slots section, where you can test the game with no restrictions at all.

Substitute: the substitute icon serves as a wild symbol substituting for any other symbol in a winning combination except scatters. Scatter: three or more scattered symbols appearing anywhere will trigger the Bonus Feature. Progressive Jackpot: the progressive jackpots are awarded completely at random. Both Jackpots may be awarded at the same time or they may be awarded at different times.
EXCLUSIVE 250% BONUS + 50 FREE SPINS
CODE: WILD250