Join the Viking in his voyage in search of treasures to pillage and make your own. While there might be danger ahead as you fight alongside your Viking friends know that you'll be richly rewarded for all your effort in this rather entertaining slot game. Vikings Voyage offers players 20 lines of excitement and allows players to bet as little as one cent or as much as $100. Keep a sharp eye out for the longboat wild card and the Viking scatter symbol. If you want to play through some rounds automatically then select the "Autoplay" function. Sail away in this Viking Voyage For Riches and Fortune. Play Vikings Voyage and Start Winning!

The Vikings are on another voyage, seeking new lands and unearthing more riches.  The Norseman symbols are your guide to those riches, helping you get a winning combo.  The Longboats cruise in gently from the left to the right of the line, increasing not just your chances of winning, but also doubles your earnings.  The free games and the scatter awards apart, the Vikings Voyage online casino slot has a jackpot that drops in any time after a game at random.  Vikings Voyage is a 20 line online casino slot from Real Time Gaming with a unique re-spin feature.
250% no max bonus+30 free spins Make your deposit and claim your bonus with the Coupon Code: VIKINGSVOY250 Play now 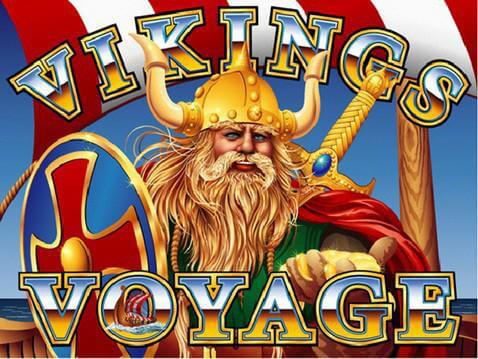 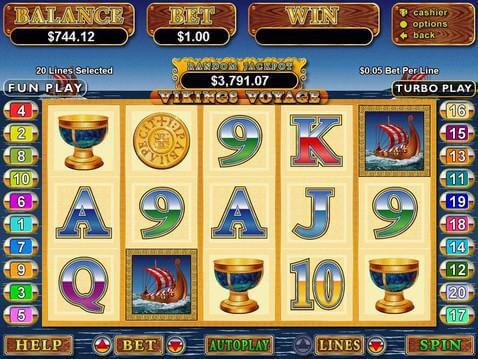 In this slot you can choose to enter your parameters in the Options menu if you want to go for the "Auto Play" option. You may select the "Stop Auto" if you do not wish to continue with the Auto Play mode. As the reels start spinning, a free game feature gets activated when three or more scattered Longboats appear from the left to the right. The Longboats give you access to ten free games, which in turn double your winnings. While a free game is on, two or more Longboats may appear from left to right, and a "Re-Spin" feature gets activated. In case you want to test the game before playing for actual money, make sure to play on our free slots beforehand.

When you play for money in the Vikings Voyage slot, you also stand a chance to win the random jackpot which can drop any time after a spin. The longboats spearhead the winning mission for players, as three of these scattered on the screen get you ten free games. The free games have more in store, doubling the prizes on all wins, except the scatters. The scatters reward you differently, by triggering a re-spin. The re-spin in turn turns the non-triggering reels up to ten times. Any scatters appearing after a re-spin are awarded. The presence of 4 or 5 scatters after a re-spin could get you another 3 or 5 games.

Re-spin: Triggered by the Longboats appearing left to right, the re-spin feature spins the non-triggered reels up to 10 times. Scatter pays are awarded after a re-spin, and the presence of 4 to 5 scatters fetch the player 3 to 5 additional free games. Wild symbol: The wild symbol that substitutes for other symbols in a winning combo, except the Longboat is the Viking. Scatter symbol: The scatter symbol in the Viking Voyage online casino slot is the longboat.
EXCLUSIVE 250% BONUS + 50 FREE SPINS
CODE: WILD250