War is a luck based game and without a doubt one of the quickest ways to boost your bankroll! A casino War is waged between just two people – the player and the dealer. Only two cards are dealt and whoever has the highest card wins. It really is that easy. Once the cards are dealt the winner is shown automatically and given their winnings. When there's a it the player can either decide to surrender or go to war which means both players must place an additional bet which is at least equal to the original bet. The dealer then discards the first three cards and reveals the 4th one to determine who the winner is. The player must have a card that is the same or higher than the dealer's to win otherwise the dealer wins. Play Now and Collect Your Spoils of War!

War is an easy game of probability. Draw a card with a higher rank than the one drawn by the dealer and you win!  In case of a tie or a push then player goes to War against the dealer! During the War, player and dealer draw three cards face down each and both draw also, one card face up. The one who obtains the highest-ranked fourth card triumphs and wins the War!
250% no max bonus+30 free spins Make your deposit and claim your bonus with the Coupon Code: WAR200 Play now 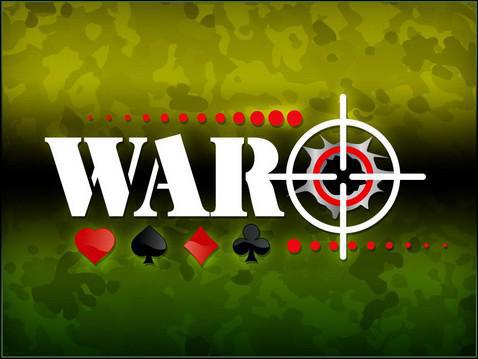 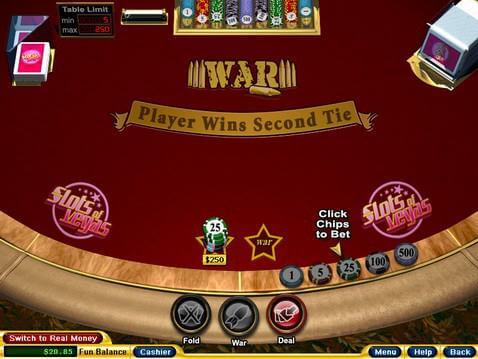 The goal of War is to obtain higher ranked cards than the dealer ones. At the beginning of each hand an Ante bet has to be placed. Once the bet has been placed, the player and the dealer will be dealt three card face-down and and a fourth card face-up. In case of a tie, player has to wager an amount equal to the Ante bet, to go to War. If you do not wish to continue you may fold. By folding you automatically conclude the play and lose your bet.

House advantage in War appears the result of a tie with the dealer. Player needs to make an extra bet in, and in case war is won, player only wins one bet. This is a fast game. Take into consideration that if you multiply the number of bets made per hour by the house you establish your cost of play per hour. So be cautious and make sure you're getting enough value for your money. In case of a tie with the dealer, do not surrender, since this modifies and increases the house edge considerably in the casino's favor. If you haven't played this game before, make sure to practice on our Instant Play section, where you can enjoy this game and many other, including free slot games and more!

Deal: once you have place you bet or bets, press Deal to be dealt the cards. War: in case of Tie press "War" if you wish to make an extra bet equal to the ante. Fold: press Fold if you think your hand won't beat the dealer's.
EXCLUSIVE 250% BONUS + 50 FREE SPINS
CODE: WILD250