Grab your magic wand and crystal ball and get ready to make some huge prizes magically appear in Warlock's spell. If you can break the spell of the Warlock then you'll win free games. The "Witches & Warlocks" icon can substitute for any of the other symbols in the game except for the spell books scatter symbol. I f you get 3 or more spell books then you'll trigger the Potion Prize game. This feature gives you six chances to break the spell. If you choose the correct one on your first try then you'll get 100 free games! Once you are playing the free games all prize amounts are triple. Warlock's Spell also features a randomly awarded progressive jackpot. Meaning you could win at any point in the game. Winnings Will Come to You Like Magic in this entertaining game. Play Warlock's Spell Now!

The time has come to break the Spell and start winning the big bucks in an adventure-filled slot machine game.  Warlock's Spell is an amazing five reel slot machine which offers huge payouts a Potion Prize Feature game feature and a random progressive jackpot.  The Potion Prize Feature may award up to 100 free games during which prizes are tripled. You can practice this and many other free slot games on our Instant Play section without no restrictions whatsoever.
250% no max bonus+30 free spins Make your deposit and claim your bonus with the Coupon Code: WARLOCKSPELL250 Play now 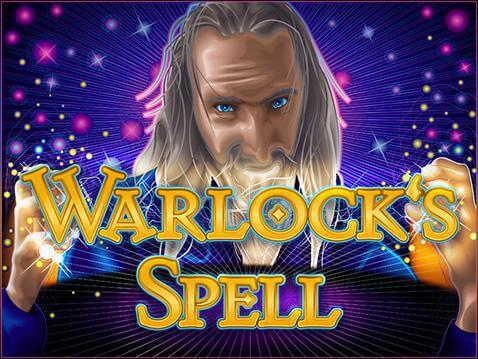 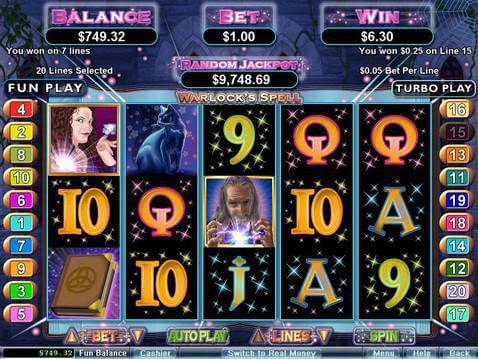 Warlock's Spell slot machine is played at a maximum of 20 lines and a max bet per line of $5. You may spin the reels by simply pressing the Spin button or you can have the game spin the reels for you by using the Autoplay feature. "Witches" and "Warlocks" symbols serve as a wild symbol substituting for any other symbol in a winning combination except scattered "Spell Books". Three or more scattered "Spell Books" appearing anywhere will trigger the Potion Prize Feature. The Potion Prize Feature may award up to 100 free games. Warlock's Spell Progressive Jackpot is awarded at random regardless of the amount wagered.

Warlock's Spell slot machine is a game of chance. If you see yourself in a losing streak, stop playing for the day and come back some other time when your luck may have changed. Play wisely and do not exceed you bankroll you have set for the day.

Substitute: the substitute icon serves as a wild symbol substituting for any other symbol in a winning combination except scatters. Scatter: three or more scattered symbols appearing anywhere will trigger the Bonus Feature. Progressive Jackpot: the Progressive Jackpot is awarded completely at random regardless of the amount wagered.
EXCLUSIVE 250% BONUS + 50 FREE SPINS
CODE: WILD250