Take your gear and go out to look for the elusive White Rhino, an endangered species that roams free on the valley of the Kilimanjaro in Africa. This exclusive safari themed game is going to take the explorer out of you to live a rewarding adventure! This is a 25 line slot machine game that gives players a whole range of options for amounts and lines to play. If you keep your eyes open, you will spot the White Rhino wild card symbol that enables you to enjoy the White Rhino Free Games bonus round. When 1 or more White Rhinos appear on each of reels 2, 3 and 4 in normal games this feature will be available. Pack your bags and search for the elusive White Rhino and the amazing prizes it has to offer! Play White Rhino Now!

This is the perfect game for explorers and adventurers, and spotting the white Rhino is just one of the many ways to win. Along the way you will come across with other symbols that will make your safari experience even more rewarding. One of the Scatter ones is the Kilimanjaro, and when two or more of these symbols appear Left to Right, the Kilimanjaro Re-spins feature starts. When this happens, Re-spins are played at the lines and bet of the triggering game, its pays are awarded after each re-spin for scatters only. The other Scatter symbol is the Guide and it awards 10 free games when 3 or more scattered Guides appear anywhere in regular games.
250% no max bonus+30 free spins Make your deposit and claim your bonus with the Coupon Code: WHITERHINO250 Play now 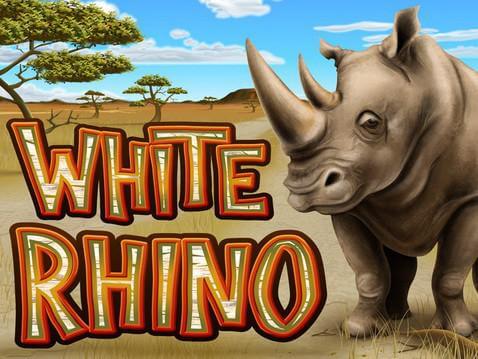 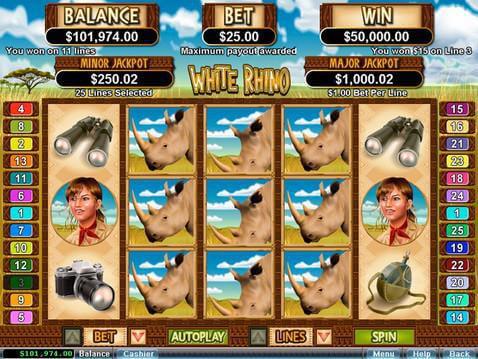 White Rhino is a slot machine game with up to 25 paylines. To get started you must choose the amount you want to bet and the number of lines you want to play. When this is set up, all you have to do is click on the "Spin" button to start the game. While playing White Rhino slots, the White Rhino Free Games awards 3 free games when triggered, plus another 3 for each White Rhino appearing on the reels. Keep in mind that when this feature is being played the scattered Kilimanjaros symbols don't appear. When the Guide Free Games are triggered, your prizes are tripled every time one or more White Rhinos appear in a winning combination. Luckily for you, this feature can be retriggered unlimited times per game.

If you are not familiarized with 5 reel games, the best approach is to try the game on our free slot games section before risking your bankroll using the fun money option. After playing some free spins you can switch back to play for the real deal and start scoring great prizes!

Substitute Symbol: It acts as a wild symbol and can substitute any symbol in order to make a winning combination. In this game the substitute symbol is no other than the White Rhino itself. Scatter Symbols: The scatter symbols will trigger different bonus features. In this game, both the Kilimanjaro and the Guide act as scatter symbols. Progressive Jackpot: There are two jackpots in this game a major one and a minor one, they are both Random and can be awarded to anyone at anytime!
EXCLUSIVE 250% BONUS + 50 FREE SPINS
CODE: WILD250