Get ready for a steaming hot bowl of fun and amazing prizes. Play Wok & Roll and get ready to cook up some delicious food as well as some tasty cash prizes. If you love Asian cooking then get ready for some fast paced action in the back of this Chinese restaurant. Wok & Roll features 25 delicious pay lines and allows players to bet as much as one hundred and twenty five dollars or as little as one cent. Keep an eye out for Chef who serves as the wild card and the Wok & Roll logo which is the scatter symbol. Want to play through a certain number of rounds automatically? Use the handy Autoplay feature. Are You Ready to Wok & Roll? Play Now to Cook Up Some Delicious Wins!

Wok and Roll is a five reel slot machine that comes filled with the most exquisite payouts, free game rounds and two juicy Progressive Jackpots. Wok and Roll will have you enjoying the Asian cuisine in completely new way.
250% no max bonus+30 free spins Make your deposit and claim your bonus with the Coupon Code: WOKNROLL250 Play now 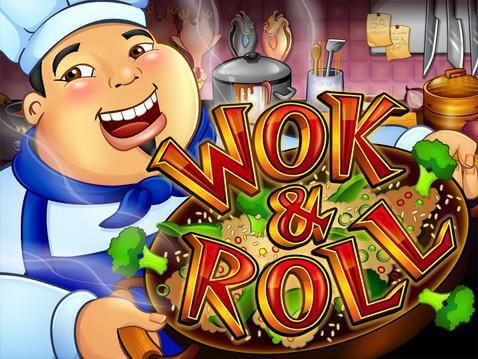 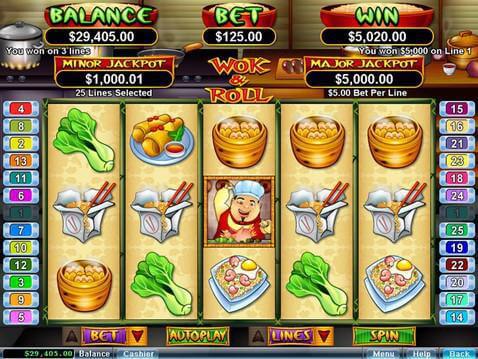 Wok and Roll is played at a maximum of 25 lines and a max bet per line of $5. Press the "Spin" button to get the reels spinning or simply go to the Autoplay feature to have the machine spin the reels for you. The "Chef" and "Extra Wild " icons serve as wild symbols substituting for any other in a winning combination except scattered "Wok and Roll" symbols. Three or more "Chefs" appearing anywhere the "Chef Feature" awarding up to 12 free games. Three or more scattered "Wok and Roll" symbols appearing anywhere will trigger the "Wok and Roll" feature, during which 10 free games are awarded with game multipliers of up to 10x Wok and Roll Progressive Jackpots are awarded completely at random, regardless of the amount wagered.

Before playing Wok and Roll, set aside a bankroll you can do without. Take into account that Wok and Roll is a game based purely on luck so you should be prepared to play the game without expecting to win every single time. Play on our free slots section for fun money before playing for actual money in order to achieve better results later on. Do not exceed your bankroll once you have played it all.

Substitute: the substitute icon serves as a wild symbol substituting for any other symbol in a winning combination except scatters. Scatter: three or more scattered symbols appearing anywhere will trigger the Bonus Feature. Progressive Jackpot: the Progressive Jackpot is awarded by coming up with five scattered "Logos" in a payline.
EXCLUSIVE 250% BONUS + 50 FREE SPINS
CODE: WILD250