Sin City, The City of Lights, the Strip, Glitter Gulch, whatever the monikers are, over the years Las Vegas has firmly cemented itself as the entertainment capital of the world. It is the playground for adults, an oasis in the desert, a player’s paradise. A metropolis that thrives on 24-hour gambling, bright lights, glamorous casinos, non-stop action, first class service, and one-of-a-kind nightlife. Vegas is larger than life and has long been a beacon in the desert – for high stakes gamblers, Hollywood’s glitterati, showgirls, thrill seekers and everything in between. Despite the years, its lights are shining brighter than ever.

They say Las Vegas has changed since the Golden Age, a period of Old Las Vegas and its esteemed history starting in the 1950s up through the late 60s. A time when lounge acts and showgirls, jazz and jokes, cocktails and comedy, and yes, gambling, flooded the Las Vegas Strip. A time when an air of mystique and magic permeated the town; when Vegas really felt like an adult’s only playground. The city offered something exciting and perhaps even a little dangerous that America craved. Freedom.

Freedom to let one’s hair down, spend some money, and most importantly have fun. The lore of mob ties and the Rat Pack, comedy icons and courts eager to be seated with “the King” are what made the Old Las Vegas stuff of legend. Learn how this dusty little town in the middle of the Mojave soon became a brightly lit cluster of glitz, glamour, and gambling only at Slots of Vegas Online!

History of the Las Vegas Strip

America’s famed City of Lights wasn’t always the wonder town that it is today. Back in the 1930s, around the end of Prohibition in the U.S., Old Las Vegas slowly transformed from a small desert town to an escape destination for out-of-towners. After Nevada legalized gambling in the 30s and the horrors of WWII, people were eagerly seeking a chance to have fun and spend money. This encouraged many would-be entrepreneurs to see the potential of Las Vegas.

Notoriously, the town’s focus on gambling made Vegas a haven for illegal operators, crooked cops and the mob. By the 1940s and 50s, now infamous characters, like Bugsy Siegel and Benny Binion, would create what would become the model of the classic Vegas online casino. Bugsy Siegel pioneered the mob-owned casinos, and over the course of a few years, mob money was pumped into the various gambling halls throughout the town. New casinos were built faster than fire through a brush, and the potential of the city was unleashed. Las Vegas would aptly come to be known as Sin City.

During this time, the United States Senate launched an investigation into organized crime in Vegas but failed to find any hard evidence of mob activity. All the investigation did was help further the allure and mystique of Old Las Vegas. The drive to push gambling out of American life only helped birth the gambling Mecca of the world. Once the rise of the Las Vegas Strip was solidified by 1959, the city never looked back.

Due to its close proximity to Hollywood by the 1960s, Las Vegas was at the height of glamor; and when the sun went down the stars came out. With money rolling in from the casinos, venue owners could afford to showcase only the finest talent. Vegas became more than a spot of spectacle for gamblers and out-of-towners. The city now saw regular visits from the rich and famous and would draw crowds with its popular lounge and comedy acts. Members of the entertainment elite like Frank Sinatra, Wayne Newton, Liberace, and Elvis Presley would learn to call Las Vegas home away from home.

Mob-run casinos like the Sahara, Sands, New Frontier, Riviera, Tropicana, and the Stardust became the draw of the Strip. And despite the mob ties, these casino venues were more popular than ever with visitors flocking from far and wide. Colorful and entertaining showgirls became a staple of Sin City with seductive Wild West Saloon performances to extravagant French style Can-can dances. The perfect platforms for performers to strut their stuff in true Vegas fashion.

Singing, boozing and crooning the Vegas showgirls was the Rat Pack: consisting of Frank Sinatra, Dean Martin, Sammy Davis Jr., Joey Bishop and Peter Lawford. They were the epitome of cool in Vegas in the 1960s. Their favorite hangout was the Sands’ Copa Room, where the group would regularly perform in between filming the iconic Vegas-centered film, Ocean’s Eleven. Each casino had its star, and visitors could hop from showroom to showroom along the Strip to be greeted by colorful lights and burgeoning venues. The cacophony of slot machines and gambling tables (like poker and baccarat), the smell of cologne and cigarettes to champagne and perfume was all part of the aura of Las Vegas during the Golden Age.

The Impact Las Vegas Had

Notable limits were not the exception as there seemed to be no limit to the beehive of activity and the impact Las Vegas had. People had never before seen the level of glamor the city had to offer. Open gambling and vice was not only not frowned upon but encouraged in the City of Lights. Card sharks and casual gamers alike flocked to the poker tables, high stakes baccarat rooms, and roulette wheels. Complimentary drinks, much like you can get today, and tuxedoed dons were a sight to behold during the Old Las Vegas casinos of the 1960s.

However, Old Las Vegas was much more than a money-making town that revolved around gambling. From a social and political standpoint, the integration of black performers, such as Sammy Davis Jr., in many of the popular casino lounges helped boost the cause of the Civil Rights Movement of the 1960s. Risqué acts like the topless shows at the Moulin Rouge-inspired by Parisian exhibitions even helped break the social stigmas of a woman’s role in society. They were 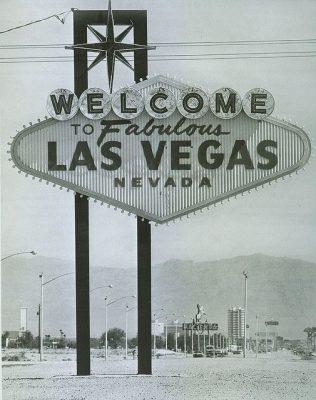 shows of elegance, and long remained popular in Vegas after their heyday.

The cool of Sin City also permeated popular culture. Films like Viva Las Vegas in 1964 starring none other than “the King” Elvis Presley himself and visits from prominent figures such as President John F. Kennedy showed that Vegas was a place of esteem and popularity, not impurity. In Vegas, everyone was a winner. Even the press couldn’t help but take note and spread the word of the powerhouse that was Vegas. Journalists and affiliated members of the press were allowed exclusive access to the stars of the age to see what drew them to the Las Vegas. The aura of Old Las Vegas would even serve as the backdrop for one of the most popular novels of the 20th century, Fear and Loathing in Las Vegas… by acclaimed American author Hunter S. Thompson.

Though one contemporary critic wrote that Vegas was “a never-never land of exotic architecture, flamboyant signage, and frenetic diversion”, it was hard to deny the intoxicant that was Las Vegas.

With the passing of the 1960s, the mobsters simply couldn’t keep up with the powerhouses of corporations that would soon take over the desert city. The 1970s and mid-80s would see the last of the mob-owned casinos, and the old school gambling halls that once graced the Strip would become a thing of the past. Many of the original casinos would eventually be demolished to make way for the mega-resorts; all-inclusive Disneyesque getaway that focused on a more family-friendly appeal. This would be Las Vegas as we know it today, and the Vegas of the 60s would become stuff of legend.

• Las Vegas started as a small railroad town in the desert but rapidly transformed after the legalization of gambling in Nevada, and the boom after the end of WWII

• The 1940s-50s saw the launch of mob-run casinos thanks to pioneers like Bugsy Siegel and Benny Binion, and the Strip came to be known as Glitter Gulch due to the flashy lights and elaborate neon signs that advertised the casinos

• By the 1960s, Las Vegas rivaled New York and Hollywood, as the entertainment capital of the world. Casinos routinely drew the biggest stars of the age to perform at their venues, such as: Frank Sinatra, Dean Martin, Jerry Lewis, Elvis and Liberace, and many, many more

• Las Vegas became synonymous with popular culture during the 60s, and also created waves of influence from social movements to literary circles

• Eventually, the mob run casinos were run out by corporations, and Las Vegas became a more all-inclusive destination for families and young party-goers alike

Before you decide to take your own trip to the Las Vegas Strip in the heart of America’s gambling mecca, be sure to check out all of the fun of casino gaming at Slots of Vegas Online Casino. We can help you brush up on your gambling skills and the best part is you don’t even have to set foot on the casino floor! With Slot of Vegas, you’ll have access to over 90 top-notch and exciting online casino games. All you need to do is visit Slots of Vegas Online and sign up. Signing up is easy, free and once you’ve completed registration you can choose to download any game to play for fun or for real money instantly!

So, why not shoot some craps or try a hand of poker Sinatra-style in honor of the Sands and the glorious glitz of the Golden era of Las Vegas. Viva Las Vegas!