Tired of being overworked and underpaid Rudolph is staging his own one man labour strike against his former boss. The good news is that Rudolph's bombs are packed with cash for you. Rudolph's Revenge features 50 exciting lines of Christmas themed fun. Get ready to play by betting as little as one cent or as much as 100 dollars. Just remember to stay out of Rudolph's way as he is quite literally the wild card here and catch those cash bombs which serve as scatter symbols. To play through some rounds automatically select the "Autoplay" function. To end the Autoplay select "Stop". It's that easy! Play Rudolph's Revenge & Win Some Extra Cash!

Rudolph has grown tired of following the orders of a ranting and abusive Santa who pretends to have everything done at the last minute. Rudolph, for a long time has carefully planned the perfect revenge. A revenge that will finally teach Santa a lesson he hasn't yet learned. Rudolph's Revenge is an a vengeful 5 reel slot machine filled with the juicy prizes Rudolph will unleash with his ultimate revenge. Come and play Rudolph's Revenge now and you may even take the entire Progressive Jackpot home!
250% no max bonus+30 free spins Make your deposit and claim your bonus with the Coupon Code: RUDSREV250 Play now 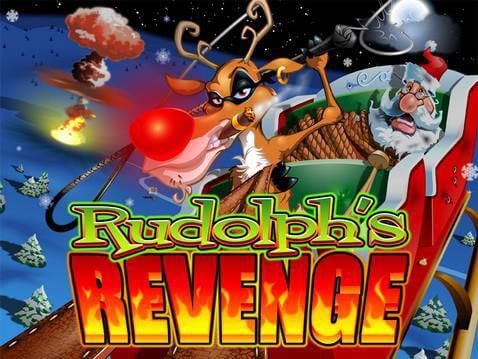 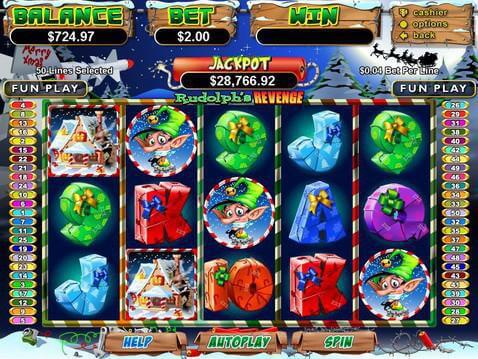 Rudolph's Revenge is played at 25 compulsory lines and a fixed bet per line of $2. Spin the reels by simply pressing the Spin button or you can have the game spin the reels for you by using the Autoplay feature. Rudolph serves as a wild symbol and will substitute for any other symbol in a winning combination except scattered Bombs. Every time Rudolph occurs in a winning combination prizes are doubled. Three or more scattered Bombs appearing left to right will trigger the Free Game Feature. The free game feature will award 7 free games during which prizes are doubled and every Rudolph occurring anywhere will add a game multiplier. Additional free games may be won during the free game feature. Rudolph's Revenge Progressive Jackpot is triggered totally at random, regardless of the amount wagered.

Playing any slot machine game can be very exciting and quite profitable. Just be careful to not go over your set bankroll for the day. Exceeding your bankroll can lead to great losses. Another great tip is to practice on our free slot games section beforehand, that way you'll get a better understanding of the game, therefore improving your chances of winning.

Substitute: the substitute icon serves as a wild symbol substituting for any other symbol in a winning combination except scatters. Scatter: three or more scattered symbols appearing anywhere will trigger the Bonus Feature. Progressive Jackpot: the Progressive Jackpot is awarded completely at random.
EXCLUSIVE $5,000 BONUS + 50 FREE SPINS
CODE: VEGAS400