Santa Strikes Back in this follow up to Rudolph's Revenge. If you volunteer to help Santa get his North Pole headquarters back under control he'll make sure you're duly rewarded. Santa Strikes Back is a 5 reel game and features 25 different paylines. Players can bet as little as one cent or as much as $125 a spin. Be on the lookout for the Victorious Santa and Rudolph symbols which serve as the scatter as well as the Santa wild card icon. To get through several rounds without having to enter the bid amounts and lines each time use the Autoplay mode. Get in the Holiday Spirit as You Win Loads of Spending Money in Santa Strikes Back! Play Santa Strikes Back and start winning!

Santa has recovered from Rudolph's Revenge and he is back on his feet to get even with Rudolph and teach him the lesson he deserves. Santa strikes back with a terrible fury and watch him snatch the power of the North Pole from Rudolph. Santa Strikes Back is a five reel slot machine that comes loaded with lots of action and adventures that are going to make you big time! Santa Strikes Back slot machine offers two bonus features and a huge Progressive Jackpot.
250% no max bonus+30 free spins Make your deposit and claim your bonus with the Coupon Code: SANTASB250 Play now 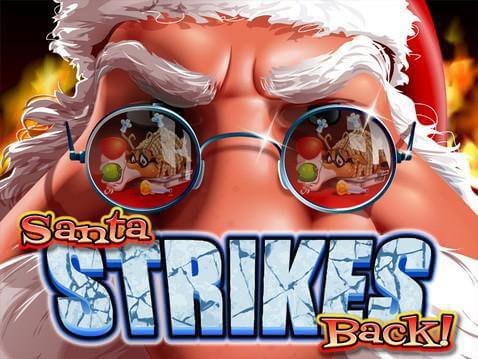 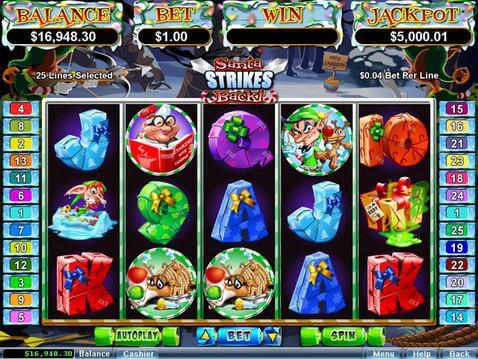 Santa Strikes Back is played at 25 a maximum bet per line of $5. Spin the reels by simply pressing the Spin button or you can have the game spin the reels for you by using the Autoplay feature. Santa serves as a wild symbol and will substitute for any other symbol in a winning combination except scattered symbols. Santa Strikes Back offers two scatter symbols, "Victorious Santa" and "Victorious Rudolph". The "Santa Strikes Back" feature is triggered every time Santa is victorious in 3 or more scatter battles after a spin. The "Santa Strikes Back" feature will award 7 free games with a initial free game multiplier of 1. Lighting all five Stars that appear during free games will add 7 additional free games and increase the game multiplier by 1. "Rudolph's Revenge" feature is triggered every time Rudolph is victorious in three or more scatter battles after a spin. "Rudolph's Revenge" feature will award 7 free games during which prizes are multiplied by 2 plus any Santa appearing on the screen. Santa Strikes Back Progressive Jackpot is triggered by getting 5 Santa symbols to occur on a line.

Slot Machines are a game based purely on chance but there are a few things you need to keep in mind. To make the most of a Slot Machine game you need to for a long period of time to see results. Set yourself a bankroll you can do without and do not exceed it once you have played it all. Practice makes perfect, and you can practice this and many other free slots with no restriction whatsoever. It is wise to start playing with a low betting amount and as you start feeling more comfortable with the game, play with higher betting amounts.

Substitute: the substitute icon serves as a wild symbol substituting for any other symbol in a winning combination except scatters. Scatter: "Victorious Santa" and "Victorious Rudolph" are the scatter symbols. Progressive Jackpot: the Progressive Jackpot is awarded by getting 5 Santas to appear on a pay line.
EXCLUSIVE 250% BONUS + 50 FREE SPINS
CODE: WILD250