Slots of Vegas News – Satisfaction Down in Macau

Group looks to get casino gambling on a ballot in Arkansas

The Driving Arkansas Forward committee, a private group in favor of legalized casino betting in the US state of Arkansas, has proposed a ballot measure that would allow the state to issue four licenses for legalized casino gambling. Current Arkansas state law allows for electronic games of skill at the two existing race tracks in the state but does not allow stand-alone casinos.

The committee’s proposal would need to generate just over 84,000 signatures by July 6 to be placed on the ballot by the Secretary of State. As part of their proposal, the committee has included an analysis that suggests the state could generate approximately $387.5 million per year to help fund the state’s roads and highways, local governments, subsidize the state’s existing horse and greyhound races and fund state regulatory agencies.

Last week the committee asked the state’s Attorney General, Leslie Rutledge, to certify the ballot name and title, a crucial step in taking the measure to a vote. The Ballot name is comprised of a few words saying what the proposal is called and the ballot title briefly describes what the initiative would do. This is a mission-critical part of the process, as earlier attempts to get legalized casino gambling on the ballot were overturned by the Arkansas Supreme Court after it ruled that the ballot title was ambiguous and possibly misleading.

Visitor numbers and spending up but satisfaction down in Macau 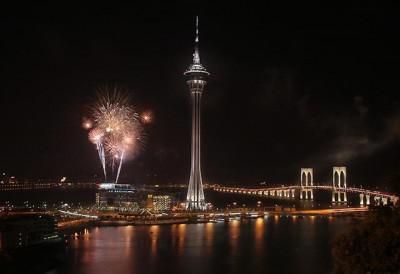 The Macau Statistics and Census Service has released its annual report, showing a notable increase in the number of visitors to the former Portuguese colony and gambling haven, that they are spending more but feeling less satisfied with the overall experience.

Visitor numbers topped 32.6 million for 2017, an increase of 5.4% year-on-year with the vast majority, a whopping 29.4 million people, arriving from Mainland China, Hong Kong or Taiwan. The Macau Government Tourism Office expects that number to continue to rise slightly, from 1% to 3% this year and to further grow once a $17.5 billion bridge connecting Macau and Hong Kong is completed and opened for traffic in July.

At the same time, visitor spending increased a marked 16.4% to hit $7.6 billion before adding gambling expenditures, which alone reached $33.2 billion.

Despite the growth in both visitor numbers and spending, the satisfaction part of the Statistics and Census Service survey showed a fairly large drop in overall visitor satisfaction. The data released by the office indicated a 10.3% drop in visitors saying that they were fully satisfied with their experience compared to 2016. 73.9% of Macau visitors said they were adequately satisfied, a drop from 84.2% a year earlier.

Unfortunately, as the data does not provide reasons for the lack of satisfaction, so the myriad possible reasons remain open to speculation. Nevertheless, Macau continues to grow by leaps and bounds. At the end of last year, the island enclave boasted 37,901 hotel rooms covering 116 hotels. With the MGM Coati opening earlier this year, another 1,390 rooms were added by the $3.4 billion projects. An additional 200 suites will also come online soon with the opening of The 13, a $1.6 billion property catering to VIP clients, comprised primarily of whales from Mainland China.

At the end of the day, there remains plenty of room to grow. Macau accommodation offerings still trail Las Vegas by a long shot, with Vegas still the world’s largest gambling focused metropolis offering over 149,000 rooms.

DraftKings, the Boston based fantasy sports contest firm, is gearing up for a change in anticipation of the upcoming decision by the US Supreme Court in the case of Christi vs. NCAA. With arguments already heard and a decision expected sometime this spring, experts are bullish on the possibility that the Supreme Court will rule in favor of New Jersey (represented by Gov. Chris Christi) and overturn a long-standing federal ban on legalized sports betting, unleashing a stampede of companies eager to get a piece of the billion-dollar pie.

US sports betting was made illegal by the Professional and Amateur Sports Protection Act of 1992, which banned sports betting nationwide, with the exception of Nevada, Oregon, Delaware, and Montana. New Jersey is challenging the ban as an unconstitutional violation of state’s rights and most pundits believe the Supreme Court is likely to rule in the state’s favor.

In light of the upcoming decision, states across the US have been fast-tracking legislation to legalize and regulate sports betting in hopes of being ready to get in on the action. DraftKings, expecting the ban to be overturned and their fantasy sports betting operation to be made largely redundant as a result, have been quick to act, hiring Sean Hurley away from Amelco UK Ltd, a London-based firm specialized in browser-based online sportsbook software as its first “Head of Sportsbook.”

Daily fantasy sports online emerged as a result of an oversight in the Unlawful Internet Gambling Enforcement Act of 2006, which banned payments processors from engaging in transactions linked to online gambling sites but specifically exempted daily online fantasy sports. As a result, the market has grown into a $3.26 billion industry rivaling the size of the illegal sports betting market in the US. All that, however, is set to change if the Supreme Court rules in New Jersey’s favor as actual online sports betting would presumably see fantasy sports betting fade into oblivion.

DraftKings and FanDuel are the two giants in the industry, pulling in nearly 97% of all wagers in 2017.