Good Luck Charms for Gambling in a Casino

So, you’ve been gambling online from home and you’re down on your luck. You need something to turn your current fortunes around and get them headed in the right direction. Well, those days of poor luck are almost over. Slots of Vegas is here to tell you how to improve your luck in gambling, and it involves adding some important features to your gambling space, also known as your home.

Below, we’ve broken down five of the best good luck charms for gambling. Adding them to any home will not only liven up the décor and give you some fun stories to tell your friends, it should help bring good luck and prosperity to your gambling space, which is exactly what you need.

Also known as the welcoming cat, lucky cat, money cat, happy cat, or fortune cat, the Maneki-Neko is supposed to bring wealth and prosperity to anyone who puts this cute, waving kitty in the front window. This adorable feline originated in Japan, where the name literally translates to “beckoning cat.”

The maneki-neko’s origins are murky, but folklore that says that long ago, a poor shop owner found a sickly, starving cat and nursed it back to health. In thanks, the cat sat outside the shop and beckoned people inside, bringing the shop owner great wealth and prosperity. From then on, the beckoning cat became a symbol of luck and good fortune, and a popular item on display for small business owners across Japan and eventually around the world.

Because of its symbolism for bringing wealth and success, the maneki-neko is a perfect good luck charm for gambling. Stick this little kitty in your front window to beckon good luck and rewards to your humble abode. 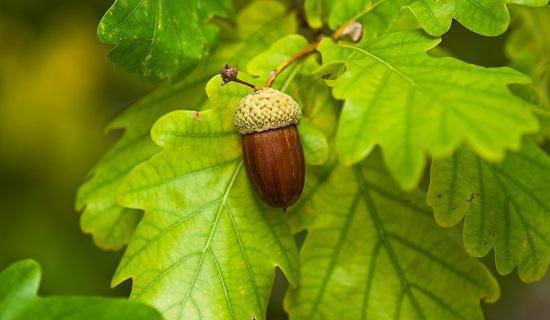 It’s time to bust out your gardening gloves and do something good for both yourself and the environment. Believe it or not, the oak tree has been considered sacred for thousands of years by many different peoples, including the Celts, Romans, Greeks, and Germanic tribes. The oak tree was considered a sacred symbol of the Greek god Zeus, the Roman god Jupiter, and the Norse god Thor, among other deities. Ancient kings wore crowns of oak leaves to symbolize the god they worshipped and “represented” on Earth, and Roman commanders were presented oak leaf crowns in victory parades.

Oak was believed to be the king of all trees, and because of this it came to symbolize power, strength, and perseverance in the face of adversity. In addition, because of their long lifespan and the amount of acorns they can produce – oak trees can live for more than a millennium and drop over 10 million acorns in a lifetime – they also represented longevity and success.

Do yourself a favor and plant an oak tree in your yard. Not only will you bring new life to your outdoor space, you’ll also bring long-term success to your endeavors, which undoubtedly includes gambling online. With the Slots of Vegas mobile site, you can play on your smartphone or tablet while you sit on your porch and admire the beauty your lucky oak tree brings to your backyard and your bankroll.

Elephants are considered lucky creatures in a number of different cultures and religions around the world. Despite the different depictions and characteristics found among them, elephants are generally believed to symbolize strength, power, wisdom, and good luck. Because of these attributes, elephants often represent financial success and prosperity, making them the perfect good luck charm for gambling.

It’s believed that if you have an elephant carving or painting in your home, it should be facing the front door to bring good luck and protect the household. It is even luckier to have an elephant carving facing the front door in the entrance hall, for it’s believed to invite longevity, knowledge, and success into your home – all of which may lead to some serious financial rewards in the future. 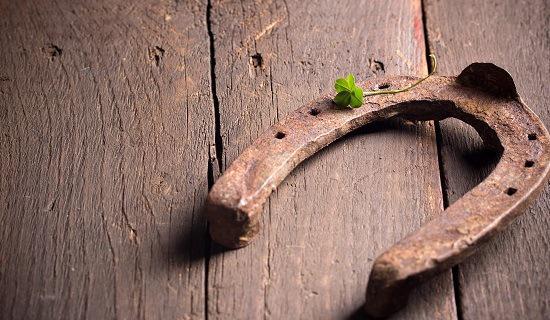 Undoubtedly the most widely known symbol of luck in North America, the horseshoe is actually a popular symbol of good fortune in numerous places around the world. Horseshoes were originally made of iron, a material that was believed to ward off evil spirits and was considered sacred, strong, and powerful due to the fact that it could withstand fire without burning or melting. In addition, horseshoes were traditionally held in place with seven nails, which was thought to be the luckiest number.

It’s believed that Saint Dunstan, the Archbishop of Canterbury and a former blacksmith, started the belief that the horseshoe was a lucky object. The tale says that when Saint Dunstan was a blacksmith, the Devil came to him and asked him to shoe his horse. Saint Dunstan agreed, but rather than nailing a horseshoe to the horse’s hoof, he nailed it to the Devil’s. The Devil begged Dunstan to remove it, and Dunstan only agreed after the Devil promised never to enter a dwelling with a horseshoe nailed above the door. Because of this story, it’s believed that if a horseshoe is nailed above the door with the points facing down, evil spirits cannot cross the threshold. Lucky for you, those who can pass underneath are showered with good fortune.

So, if you’re looking to make it rain and need a shower of good luck, try nailing a horseshoe above your front door. When you walk across the threshold after a long day of work, the good luck from the horseshoe will surely show in your online gambling. Try out the luck you earn from your horseshoe at Slots of Vegas on Lucky 8’s, an online scratch cards game that features another good luck symbol – the four-leafed clover!

Unlike the majority of the items on this list, which are lucky for general financial success, alligator teeth are considered to be especially lucky for gambling. The belief originated in the southern part of the United States, when slavery was at its height. It was believed that African slaves often came into contact with the predators in the swamps and admired the tenacity and strength that alligators possessed in their teeth, jaws, and feet to catch and hold onto prey. Alligators naturally shed teeth, so slaves often found them when out in the swamps.

Because of this admiration, alligator teeth often ended up as an important ingredient in gris-gris bags. These were amulets used in the Voodoo practice and believed to protect the wearer from evil or bring good luck. In addition to being a part of these amulets, alligator teeth were often worn as pendants around the neck to bring protection and financial success in gambling.

While we don’t recommend attempting to find alligator teeth in the swamps of the American south, a fake replica of an alligator tooth would probably suffice. After all, it’s not so much the object itself, but what it symbolizes and the luck it brings to your game. Keep it close while you play your favorite casino games online at home and you’ll be able to latch onto sweet rewards with the strength and tenacity of the alligator.

You asked us how to improve luck in gambling, and we delivered. So, now that you know the best good luck charms for gambling, you only need to do a little redecorating and your home will be a lucky haven for all your endeavors. Plant that oak tree, put that beckoning kitty in your front window, and log onto Slots of Vegas today!

Take a look “Why we love bitcoin casinos“